Based upon Orb Union's Izumo-class battleship, the Archangel-class mobile assault ship was jointly developed by the Atlantic Federation of the Earth Alliance and Orb Union's Morgenroete. The first ship of the class, the LCAM-01XA Archangel, was created to support the five prototype mobile suits developed under the G Project, and during operations, it was meant to deploy the GAT-X102 Duel Gundam and GAT-X103 Buster Gundam, Lieutenant Mu La Flaga's TS-MA2mod.00 Moebius Zero, and two TS-MA2 Moebius for defense, while the GAT-X105 Strike Gundam, GAT-X303 Aegis Gundam, and GAT-X207 Blitz Gundam took the battle to the enemy.

Besides the capacity to carry at least 8 mobile weapons, the Archangel-class is also an effective battleship and is capable of providing fire support to its mobile suit forces during combat. The ship is well-armed, with two “Lohengrin” Positron Blaster Cannons, two “Gottfried” Dual High-Energy Beam Cannons, sixteen 75mm CIWS, two “Valiant” Linear Cannons, sixteen Surface-to-Air Missile Launchers, and twenty-four Surface-to-Ship Missile Launchers. This makes the class the most heavily armed warship of the Earth Alliance at that point in time, surpassing vessels such as the Nelson-class battleship and Agamemnon-class carrier. The Archangel-class also featured Laminated Armor, providing it better protection against beam weaponry, ablative gel dispensers for protection against the heat of atmospheric entry, and a number of multipurpose launchers for deploying flares, anti-beam depth charges, etc.

The most powerful weapon of the Archangel-class are its two "Lohengrin" positron blaster cannons, which are retractable and mounted inside the two front "legs" of the ship, directly below the launch-bays and the hangar.

The only other beam weapon carried by Archangel-class ships are two "Gottfried Mk.71" 225cm dual high-energy beam cannons, which like the ones of the Izumo-class ships, are rotatable and the cannon barrels are movable. The beam cannons are retractable and mounted on top of the two "legs".

The Archangel-class is armed with an array of 16 "Igelstellung" 75mm automatic multi-barrel CIWS guns for intercepting incoming missiles or enemy units. The CIWS guns are movable to shoot down targets from several directions.

At the back of the ship, on each side, mounts a single "Valiant Mk.8" 110cm linear cannon, which are retracted when not in use. It could operate underwater after the Archangel was altered and was effective against underwater MS and submarines.

The Archangel-class ships have 16 surface-to-air missile launchers located at the rear of the bridge tower. These launchers are loaded with small, short range "Helldart" anti-aircraft missiles, which are generally ineffective at damaging targets with phase-shift armor, but useful for intercept incoming missiles and the like.

24 surface-to-ship missile launchers are located in the stern sections of the Archangel-class ship that project backwards behind its dorsal wings and directly above its engines. These launchers house the larger missiles such as "Sledgehammer" anti-ship missiles, "Korinthos M114" anti-air missiles and "Wombat" atmospheric missiles. When fired, these missiles normally perform a 180° turn in a wide arc around the side of the ship and then forward towards their target.

A special heat-absorbing gel the Archangel-class ship uses to protect itself from the heat of atmospheric entry. This substance evaporates away as the ship descends, so it must be continually replenished by the gel dischargers on the underside of the hull.

Defensive devices that can be fired from the multipurpose launchers distributed around the hull of the Archangel and other space warships. They detonate between the ship itself and the enemy vessels, creating a cloud of beam-absorbing particles that temporarily decrease the energy of incoming beams. However, the particles have the same effect on the beam weapons of the ship which deployed the depth charges, so they aren't appropriate for all tactical situations.

The outer hull of the Archangel-class ship is made up of a single piece of laminated armor, which protects the ship from beam shots by dissipating their energy across the entire surface of the ship. This enables the ship to survive several direct hits from beam weapons, but because the beam energy is converted to heat, the armor can be fatally damaged when the accumulated energy overloads the ship's heat management systems.

A reusable external booster designed to help Orb's Izumo-class warships launch into space. Once the vessel has reached the desired velocity, the plasma boosters detach and return independently to Earth. The Archangel, which shares many design elements with the Izumo class, is able to use these boosters when it launches into space from the Orb Union.

The first ship of the class, the Archangel, was created at Orb Union's resource satellite Heliopolis and rolled out on January 25, CE 71, under less than ideal circumstances: it was in response to ZAFT attacking Heliopolis with the intention of stealing or destroying both the Earth Alliance's newest warship (the Archangel) and the G-Weapons. Most of the primary crew of the Archangel were killed during the initial siege, which included the pilots of the G-weapons, leaving only a few lower-ranking officers and mechanics to operate the ship.[1] As the highest-ranking officers present, Lieutenant (later Lieutenant Commander) Murrue Ramius captained the ship while Natarle Badgiruel acted as the ship's Executive Officer.[2] ZAFT succeeded in stealing four of the five G-Weapons and destroying two TS-MA2 Moebius, and although the Archangel survived the initial assault, it was left with only the GAT-X105 Strike Gundam and Lieutenant Mu La Flaga's TS-MA2mod.00 Moebius Zero. With the aid of Kira Yamato piloting the Strike and Mu La Flaga's Moebius Zero, the Archangel escaped Heliopolis, and began its frantic trek to the Atlantic Federation headquarters, carrying civilian refugees along the way. The ship's main pursuers, the Le Creuset Team, continued to trail the ship after their encounter at Heliopolis, in an attempt to sink the ship and/or the Strike.

After the ship pitted at the Eurasian Federation base, Artemis, and passed through the Debris Belt, the Archangel linked up with Admiral Halburton's 8th Fleet in Earth Orbit. She took on-board two FX-550 Skygrasper, which were compatible with the Strike's Striker Packs, while most of the civilian refugees disembarked from the ship before its descent to Earth.[3] On Earth, the ship plotted a course for the Atlantic Federation base JOSH-A at Alaska, traveling through the ZAFT-controlled African Desert, across the Red Sea, through Southern Asia, and into Orb Union's territory. At Orb, the ship refueled and restocked for its final march towards Alaska. However, en route to the JOSH-A, the Archangel lost the Strike and one Skygrasper in combat, but recaptured the GAT-X103 Buster Gundam and defeated both the GAT-X207 Blitz Gundam and GAT-X303 Aegis Gundam.[4]

Arriving at JOSH-A, the Archangel was partially supplied while some of its crew, such as Natarle Badgiruel, Flay Allster, and Mu La Flaga, were reassigned. However, ZAFT's attack on JOSH-A led the ship to protect the base's main gate and prompted Mu to return and defend the Archangel. Escaping the ensuing explosion generated from the base's Cyclops System, the Archangel added the stolen ZAFT mobile suit ZGMF-X10A Freedom Gundam to its complement, piloted by former Strike pilot, Kira Yamato. After the Battle at Alaska, the ship returned to Orb for resupply and repairs. But with the sequential fall of Panama Spaceport and the battle at Orb occurring thereafter, the Archangel returned to space via Onogoro's Mass Driver, accompanied by the Orb Union's Kusanagi and adding both the restored Strike, now piloted by Mu, and the Freedom's sister unit, the ZGMF-X09A Justice Gundam, piloted by Athrun Zala. Labeled as a renegade ship by the Alliance, the Archangel joined with the Kusanagi and the ZAFT renegade ship Eternal, led by Lacus Clyne, to form the Three Ships Alliance in the wake of the war's escalation.[5][6]

During this time, a second Archangel-class ship was built: the Dominion, commanded by Lieutenant Commander Natarle Badgiruel. Stocked with many GAT-01 Strike Daggers, as well as the GAT-X131 Calamity Gundam, the GAT-X252 Forbidden Gundam, and the GAT-X370 Raider Gundam, debuted on June 18 at the Mendel colony, with the primary task of destroying its eldership, the Archangel. Both ships fought against one another at the Battle of Mendel, with the outcome being a stalemate and the Dominion retreating to the lunar base. While the Archangel resupplied and prepared for the final battle, the Dominion led the Earth Alliance in a successful nuclear strike against ZAFT's base at Boaz. Both ships once battled again when the Dominion led a second nuclear attack on the PLANTs, which prompted the Archangel, along with the Kusanagi and Eternal, to intercept the fleet at the Second Battle of Jachin Due on September 26. During this climactic fight, not only did the Dominion lose the Calamity, Forbidden, and Raider, the Dominion herself was destroyed by the Archangel's Lohengrin. While the ship itself was severely damaged in its fight with the Dominion, the Archangel also lost the Justice and Strike in combat and retrieved the massively crippled Freedom. With the war over, the ship returned to Orb for maintenance and repairs.[7]

After the war, the Archangel was repaired and hidden in a secret hangar at Orb and was upgraded with submersible capabilities. Its crew had since been adopted to the Orb military and assumed aliases while living in the country. After a failed attack by ZAFT commandos in CE 73, the Archangel left the facility, and its mobile suit complement at this point was the restored Freedom piloted by Kira, the MBF-02 Strike Rouge piloted by Cagalli Yula Athha, and a custom MVF-M11C Murasame, a new transformable mobile suit piloted by Andrew Waltfeld. Later that year, the Archangel intervened in battles between the ZAFT battleship LHM-BB01 Minerva and a joint Alliance/Orb task force near the Dardanelles and again off the coast of Crete. After the second battle, six more MVF-M11C Murasames from the Orb aircraft carrier Takemikazuchi defected to the Archangel.

Shortly after the exposure of the shady group 'LOGOS' being the true warmongers of human civilization, ZAFT issued orders to destroy the Archangel, called Operation: "Angel Down". Being pursued by a team under Commander Willard and ultimately the LHM-BB01 Minerva, the Freedom was destroyed by the ZGMF-X56S Impulse Gundam, and the Archangel's outer hull was damaged by the Minerva's Tannhäuser. The Archangel returned to Orb and was repaired at a secret Morgenroete facility before ZAFT's attack on Orb (codenamed "Operation Fury").

During ZAFT's invasion of Orb, the Archangel engaged the LHM-BB01 Minerva head-on. With both ships evenly matched, Capt. Ramius decided to submerge the Archangel into the water to break free from the Minerva's relentless pursuit (realizing that once the ship was underwater, the Archangel was virtually unchallenged in terms of firepower because all the beam weapons from the Minerva cannot hit targets underwater). The Archangel then proceeded to fire its Valiant linear cannons at the Minerva which was above the water surface. Afterward, the Archangel destroyed ZAFT support ships and submarines (including the St. Helens which was the flagship of Operation Fury) one by one with torpedoes and forced a retreat of all ZAFT forces.

After the Battle of Onogoro, the Archangel was assigned to Orb's 2nd Space Fleet, and made its way to the Moon for an intelligence mission. After the mission was completed, the Archangel was joined by three Izumo-class battleships, including the Kusanagi, and headed for ZAFT's fotress, the Messiah, where it fought in the last battle of the Second Alliance-PLANT War. 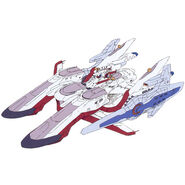 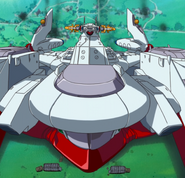 Exiting the Atmosphere with Plasma Boosters (1)

Exiting the Atmosphere with Plasma Boosters (2)

As part of Three Ships Alliance

Destroyed in battle against Archangel 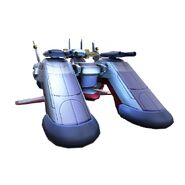 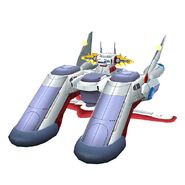 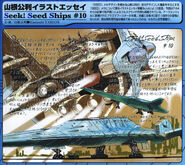