The Gundam Wiki
Register
Don't have an account?
Sign In
Advertisement
in: Stubs, Characters, Universal Century characters,
and 2 more

Arbeo was a mentor of Chronicle Asher while they were in military school. He heads to Earth early in the series with his Tomliat squadron where he and Chronicle are reunited. He leads several attacks on the Victory Gundam which fail to defeat it. He later turns up leading part of the Motorad fleet as is heads to Earth. The League Militaire comes across him again shortly after returning to space. He decides to head out to do battle with them in his mobile armor Birknau, but his subordinate Lupe Cineau plows her damaged Bruckeng mobile suit into it, killing both of them. 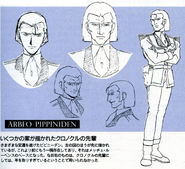