The A.E.U.G. (エゥーゴ, E~ūgo?) is the main protagonist faction of Mobile Suit Zeta Gundam and Mobile Suit Gundam ZZ. The A.E.U.G. were an anti-Federation movement which opposed the oppressive tactics of the Federation's elite Titans taskforce. The A.E.U.G.'s ultimate political agenda was to reform the corrupt Earth Federation government, but after the Colony 30 Incident of U.C. 0085, the organization became focused on the more urgent task of fighting the Titans with military force [1].

The AEUG is originally a political movement aiming to reform the corrupt Earth Federation government, but following the "Colony 30 Incident" in Side 1 due to the hands of the Titans, the AEUG takes up arms against them. Composed of dissatisfied colonists, Federation soldiers who disown the Titans and several ex-Zeon officials posing as Federation officers, One Year War veterans Bright Noa, Henken Bekkener and Quattro Bajeena are some of the notable members of the AEUG, alongside AEUG founder Blex Forer and Newtype civilian recruit Kamille Bidan, whose piloting skills and Newtype powers are among the best in Universal Century history.

In UC 0087, the AEUG raids a Titans' military facility in their colony base in Side 2 called Green Noa 2 (also named as Gryps Two), stealing three new-concept RX-178 Gundam MK II prototypes. This enrages the Titans, and following a chain of events due to the heist, the full-scale Gryps Conflict civil war for control of the space colonies erupts between the factions.

The AEUG utilizes several units during the war, among them the Gundam MK II stolen from the Titans (the other two are turned over to Anaheim Electronics for analysis and reverse engineering), the prototype transformer MSA-005 Methuss, the Federation-influenced MSA-003 Nemo and MSN-00100 Hyaku Shiki, as well as the Zeon-influenced RMS-099 Rick Dias mobile suits. The AEUG's main fleet is made up of several Salamis-class cruisers, at least five Irish-class battleships, and their flagship assault cruiser, the Argama. However, the most powerful weapon in the AEUG's arsenal is undoubtedly the transformable MSZ-006 Zeta Gundam, which becomes their symbol of defiance in a manner similar to the Federation's previous RX-78-2 Gundam during the One Year War. For the next year, the AEUG engages the Titans around the Earth Sphere, finally managing to seize the upper hand and ultimately use the Titans' Gryps Colony Laser against them, destroying/disabling nearly every remaining ship in the Titan's fleet.

Unlike other military organizations within the Universal Century, the AEUG is primarily a rag-tag group consisting of renegades and some otherwise civilian fighters. Their main military force is made of defected ships, and for a considerable time, large numbers of RGM-79R GM IIs from the Federal forces, and whatever they can steal from the Titans. Uniform code and military procedure is especially lax, with the AEUG uniform simply being the Federation tunic minus the sleeves and with a V-neck; some members continue to wear the Federal Forces uniform or simply civilian casual clothing. There also appears to be no general recruitment standard other than being physically fit and able to serve. This can be considered an anti-thesis to the highly elitist and organized standards of the Titans.

Due to Titans' activities placing numerous restrictions on trade and commerce, the AEUG and their Karaba allies activities are funded, to a large extent, by individuals and companies in the private sector (notably the lunar organizations financing Anaheim Electronics, and the Earth-based Luio Company in Hong Kong. Unfortunately, this has the side-effect of putting many non-military officials into leadership positions; although Blex, Henken, Quattro and Bright are considered the AEUG's official leaders, there is no doubt their main influence comes from Anaheim Electronics and other sponsors. The ineptness and indecisiveness of the AEUG's leadership, however, has led to more than one blunder, namely the botched assault on the Federation Jaburo basin in South America and the attempted negotiations with the Zeon remnants in the asteroid Axis.

When out on the field, the AEUG's sponsors will usually send a representative to oversee strategic movements and overall command. During the events of Mobile Suit Zeta Gundam, one such representative, Anaheim Electronics's Wong Lee, spends a large amount of his time aboard the Argama. Bossy and argumentative, Wong frequently clashes with the Argama's officers and crew over everything from tactical procedures to the somewhat informal atmosphere aboard the warship.

While the AEUG and the Titans are busy fighting amongst one another, the real threat to the peace of the Earth Sphere, Axis Zeon, led by Haman Karn, emerges as the eventual winner. In Mobile Suit Gundam ZZ TV series, the AEUG's objectives shifts towards fighting the new Neo Zeon movement. However, the bulk of the AEUG is still recuperating from the Gryps Conflict, thus only the Argama and its skeleton crew initially sees action.

After the First Neo-Zeon War, the AEUG officially disbands, with most of its members going on to form the Federation's Londo Bell task force.

These characters are possibly AEUG members as they were available characters in the video game Gihren's Greed and also appear in other various media. 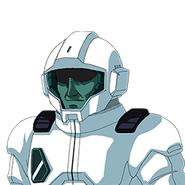 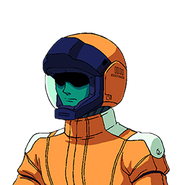