A Earth Federation Forces mobile suit pilot who fought during the One Year War, he is known for his cheerful disposition and keen eye for identifying strategic opportunities. However, after fellow pilot Larry Radley is killed in action, his personality takes a turn for the worst. 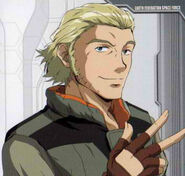 Retrieved from "https://gundam.fandom.com/wiki/Anish_Lofman?oldid=452829"
Community content is available under CC-BY-SA unless otherwise noted.