While other psycommu systems merely read brainwaves and translated them into machine code to control weapons, the Angel Halo harnessed the power of twenty-thousands "Psychickers", all controlled by a single Newtype in the middle, and used them to "devolve" the human mind through the use of "psycho waves". While initially promoted by Fonse Kagatie and as a means of using Maria Pure Armonia's Newtype abilities, with the amplification of the Psychickers, to erase any violent thoughts or urges in mankind, its true ability was to trigger mental regression to an infantile state in all living things on Earth, causing them to fall into a deep, year-long sleep. From there, upon Angel Halo's landing on Earth, the effects of the fortress would cause rapid cellular degeneration, premature aging and death of all those put to sleep by its waves. In early developmental plans, an extraterrestrial bacterium called "Angel Call" would be released to eliminate humanity. The Angel Call was later deemed too dangerous after attempts to develop a vaccine were unsuccessful.

The Angel Halo had no outer defenses and was only guarded by a Zanscare fleet. However, the effects of the structure's systems prevented potential attackers from getting close.

According to Curtis Rothko, the Angel Halo was originally conceived as a joint effort between the Jupiter Republic and Zanscare Empire to transport 100,000 Jovian immigrants to the Earth Sphere. However the Zanscare Empire quickly seized Angel Halo, and turned it into a weapon.

Angel Halo was used by the Zanscare Empire in an attempt to tranquilize and eradicate all life on Earth. Using Queen Maria's prayers for peace as a trigger for the Psychicker's abilities, the psycommu system was proven dangerously effective as it approached Earth. However the interference of the League Militaire in destroying the numerous rings to the fortress, in addition to the efforts of Shahkti Kareen and Üso Ewin led to Angel Halo's dismantling and destruction.

Debris from Angel Halo still remains in space, as various parts begin to enter the Earth's atmosphere, either burning up on entry or crashing onto Earth.

The wreckage eventually fell onto Earth, creating a large impact zone near Czechoslovakia. Seventy years later, during the events of G-Saviour, the Congressional Armed Forces hid a secret mobile weapon factory inside the wreckage. 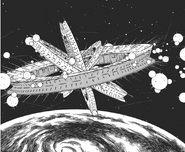