Waltfeld has a brash personality in both terms; he's nice and likeable, but serious when engaged in warfare. When he first met Kira and Cagalli, his personality was more like a know-it-all stranger. To Kira, he posed unique questions about love, hate and the mechanisms of war, showing a depth of personality that was more than just a soldier. Waltfeld is also a hobbyist with a cultural obsession. His passions are archeology (especially Egyptology), paleontology, and coffee. He seems to have an obsession with coffee and experiments with different blends and flavors, oftentimes making odd combinations such as adding kona to one of his blends.

His previous job in the PLANTs was as an advertising psychologist, and he is also an authority on vibration engineering. The limbs he lost in the battle with Kira have been replaced with prosthetics, and his left prosthetic arm has a gun built in as a hidden weapon. When Lacus was attacked by a special force team consisting of coordinators led by Joppe Von Arafas, he used his left prosthetic hand to catch the enemy's knife, and then fought them off with his gun. He also showed that his handicap did not hinder his ability to pilot a mobile suit.

Andrew was a top-notch commander and MS (mobile suit) pilot, and was a hero known to all in ZAFT. However, his fame among the general public and the nickname "Desert Tiger" is said to be due to the fact that he was promoted by an advertising agency to raise the will to fight. Waltfeld was a commander of the ZAFT forces in the PLANT-allied African Community, headquartered at Banadiya, and was ably assisted by his executive officer Martin DaCosta. Waltfeld earned his fame for his great tactical skill at desert combat, as demonstrated on May 30, CE 70, when he defeated a Eurasian Federation tank corps at El Alamein, using the new TMF/A-802 BuCUE and older TFA-2 ZuOOT mobile suits. He lived with his girlfriend, Aisha, who also assisted him in his military operations and actually served as the co-pilot of his TMF/A-803 LaGOWE.

When the Archangel accidentally landed in Africa following its atmospheric descent, Waltfeld was quick to deploy his forces, but was surprised when the GAT-X105+AQM/E-X03 Launcher Strike Gundam's pilot, Kira Yamato, was able to immediately adapt to the soft desert terrain. Though his BuCUEs had the advantage in both numbers and speed, the tide shifted when Cagalli Yula Athha arrived with forces from the anti-ZAFT guerilla force, Desert Dawn.[1]

As a result, Waltfeld pulled back and ordered an Attack on Tassil, which held the family members of the guerillas.[2] Though he attacked, he firmly orders his forces to evacuate civilians; successfully destroying the guerillas' supplies whilst avoiding casualty and injury to the populous.[3] Despite this act of mercy, the enraged members of Desert Dawn attempted to attack the superior BuCUEs and would've been wiped out had it not been for the Strike's intervention.[3]

A few days later, Waltfeld coincidentally met both Cagalli and Kira in the city of Banadiya, during an argument with the former over kebab sauces. Their conversation was put to an abrupt halt as members of Blue Cosmos attempt to ambush the ZAFT commander, but Waltfeld had already positioned undercover soldiers and the assassins were quickly killed. As thanks to Kira, who also stepped up to help, Waltfeld invited Kira and Cagalli to his estate, and left Cagalli with Aisha.[4]

When Aisha returned Cagalli to Kira, Waltfeld sparked a discussion over the true cause and end of war, revealing that he correctly deduced Kira, a coordinator, to be the Strike's pilot, as well as asking the riled Cagalli if she preferred to fight until her death. As Waltfeld's forces would continuously hound the Archangel in its attempt to reach Alaska, the ship chose to work alongside the Desert Dawn to fight Waltfeld in a decisive battle. Though Waltfeld received Yzak Joule and Dearka Elsman, he ordered them to position the GAT-X103 Buster Gundam and GAT-X102 Duel Gundam atop the Lesseps before he engaged the GAT-X105+AQM/E-X01 Aile Strike Gundam with his new TMF/A-803 LaGOWE. During the Battle of Talbadiya, at Waltfeld's insistence of fighting until the other was dead, Kira landed the final blow on the LaGOWE; stabbing it with the Strike's Armor Schneider Knives. Before the unit's explosion, Waltfeld immediately rushed to embrace Aisha before the pair were seemingly killed.[5]

Theft of the Eternal

Luck seemingly befell Waltfeld, when Lowe Guele and his Junk Guild companions discovered and rescued him and he was soon back in the PLANTs. Waltfeld claimed loyalty to Chairman Patrick Zala in the name of vengeance, and was assigned as captain of the support ship Eternal; however, along with Martin DaCosta and other Clyne Faction loyalists, he helped Lacus Clyne to steal the ship and, following their escape, took refuge in the abandoned Mendel Colony with the Archangel and Orb's Kusanagi.[6]

Waltfeld soon reunited with Kira and noted that while he had every reason to spite his foe, doing so would not serve any purpose.[6] He remained as the Eternal's captain when it formed the Three Ships Alliance alongside with the Archangel and Kusanagi. By coincidence, the group were attacked by the Earth Alliance's second Archangel-class ship, the Dominion.[7] Before Waltfeld could disembark to aid his allies, both Mu La Flaga and Dearka zip past them after reporting that pursuing ZAFT forces were arriving from the rear.[8] In response, Waltfeld turned the ship around to engage Rau Le Creuset's fleet. Ultimately, the Eternal prevailed as it is able to break the ZAFT blockade, as well as sink Le Creuset's flagship, the Vesalius.[9]

Muruta Azrael, leader of the Blue Cosmos and an influential leader in the Atlantic Federation, later acquired data on the ZAFT's Neutron Jammer Canceller, allowing the Earth Alliance to resume use of nuclear weapons against the Coordinators. Upon seeing the Alliance forces unleash their wrath on the military asteroid, Boaz, members of the Three Ships Alliance immediately believed the next target to be the PLANTs.[10]

Though the members of the Three Ships Alliance arrived to stop Azrael's nuclear missiles, Patrick Zala unleashes ZAFT's own superweapon, GENESIS, which destroyed half of the Alliance forces' in a split second and was now poised to target the Earth. A chaotic battle ensued with the Eternal being severely damaged by Rau Le Creuset's ZGMF-X13A Providence Gundam, but the Three Ships Alliance prevailed and forced a peace following the deaths of both Azrael and Zala along with their extremist beliefs.[11]

After the First Alliance-PLANT War, Waltfeld lived in the Orb Union with Archangel captain Murrue Ramius, who also lost a lover in the war. He received a prosthetic arm, which concealed a shotgun. Apparently, he was also made Captain in the Orb Union's Military. In CE 73, Orb was in the process of its eventual decision to join the Atlantic Federation. Knowing the ZAFT ship, Minerva was still within its territory for repairs, Waltfeld sent a secret message to its captain, Talia Gladys, warning her of their situation and advised them to immediately evacuate.[12] As a Coordinator, Waltfeld's fate was left in question and concerned for Ramius. Although he had the option to go back to PLANT under the more moderate and tolerant Gilbert Durandal, he also offered Ramius the same sanctuary in the case things didn't work out in Orb.[13]

Later that night, a group of armed Coordinators approached their mansion with the intent of killing Lacus. Their presence was noticed by Haro, and Waltfeld and the others are immediately alerted of their presence. Because of this, Waltfeld opted to go out and distract the majority of the gunmen, while leaving Ramius to escort Lacus, Kira, Reverend Malchio, Caridad Yamato and the orphans to their mansion's armored bunker.[13]

Once he regrouped with them, the assassins were forced to pilot their UMF/SSO-3 ASH mobile suits in order to break through. With little option left, Andrew asked Lacus for the keys leading to the repaired ZGMF-X10A Freedom Gundam's hangar. Once Kira was able to pilot his unit, he cripple all of the assassin's mobile suits. However, the pilots all opted to self-detonate their units rather than be captured.[13]

After the assassination attempt on Lacus, he left Orb aboard the Archangel with Kira, Lacus, and Murrue. While Murrue offered him command of the ship, Waltfeld declined, instead choosing ti serve as an operator and pilot for the Archangel with his custom MVF-M11C Murasame mobile suit. Their first task was to abduct Cagalli during her political wedding with Yuna Roma Seiran.[14] Once they brought her back, Cagalli eventually broke down from her inability to do anything with her wishes for Orb's future. The group eventually decided to act independently, should conflict find its way once again to Orb.[15]

While docked underwater after being hosted by the Kingdom of Scandinavia, Waltfeld and the Archangel's crew were surprised to find an imposter Lacus under the employ of Chairman Durandal. Concurrently, western Eurasia had become increasingly unstable due to the second war, leading to the area being placed under ruthless administration and many wishing to break away and gain independence. Although the crew believe that Durandal would likely make use of the opportunity and assist the separatist factions, Kira believed this to all be an opportunistic move to improve his public reception given the assassination attempt on Lacus.[16]

To Cagalli's fears, Orb's military forces were deployed to help hunt down the Minerva after its many interferences throughout the Atlantic Federation's territories. The two sides ended up meeting at Dardanelles, where Cagalli emerged and attempts to stop the Orb forces. In response, Yuna declared her to be an imposter and ordered for her to be attacked. With Kira focused on the battle itself, Waltfeld went out to defend Cagalli from Orb's forces.[17]

After this complication, Waltfeld and Lacus both departed from the Archangel's crew to monitor the PLANTs, as well as to uncover Chairman Durandal's ulterior motives. To do so, they hijacked a shuttle, and were able to escape thanks to Kira's aid.[18]

Returning to the Eternal

After the pair rejoined the Eternal, the two coordinated with their allies from Terminal's asteroid base.[19] During this period of time, Waltfeld and the others opted to remain hidden, using their time in space to gather data regarding Chairman Durandal. Their attempts eventually lead them to discover the "Destiny Plan", a radical solution of ending conflict by stripping people of their future choices and acting only according to the Chairman's pinpointed path of what they would be best for based on their genetics and talents.[20]

Second Flight of the Eternal and the Remainder of the War

At the same time, however, ZAFT forces had discovered the location of the Eternal, and Waltfeld pilots a custom-colored ZGMF-X88S Gaia Gundam in an attempt to hold off the enemy forces as the Eternal sent the new Infinite Justice Gundam and Strike Freedom Gundam to Earth. Kira Yamato's timely arrival in Cagalli's Strike Rouge (its PS armor changed to Strike's colors) helped even the odds and promptly give him the opportunity to tell the young Coordinator to dock with the Eternal and claim his new mobile suit.[20] After regrouping with Kira, Waltfeld returned to being captain of the Eternal for the duration of the war and left the mobile suit fighting to others. After the war had ended, Andrew moved back to his home in Orb and was seen making coffee for Murrue Ramius and Mu La Flaga.[21] 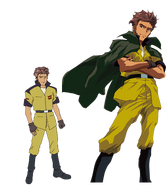 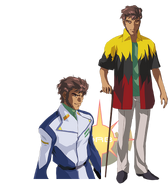 Andrew in Disguise (Fangs of the Enemy, HD Remastered)

Andrew with a gun (Fangs of the Enemy, HD Remastered)

Waltfeld in his custom ZAFT pilot suit. (The End of the Sandstorm, HD Remastered)

Andrew & Aisha's Last Moments Together (The End of the Sandstorm, HD Remastered)

Waltfeld in his custom Orb pilot suit (Kira of the Skies, HD Remastered) 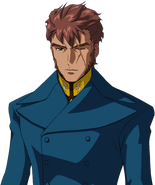 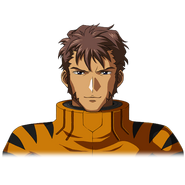 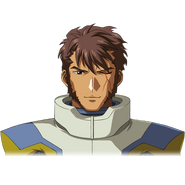 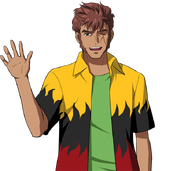 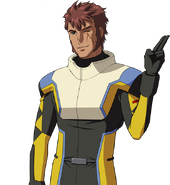