The Anchor is a custom mobile suit which appears in the manga series Mobile Suit Crossbone Gundam: Dust. The unit is piloted by Ash King.

Like a number of mobile suits in the warring states era, the Anchor is a "Mixing Build" constructed from the salvaged parts of old mobile weapons, including the F89 Gundam F89. As the Gundam F89 was created early in the Formula Project as a testbed unit, the Anchor is over 18 meters tall. While most Mixing Build MS have poor balance, the Anchor was restored by experienced engineers and thus does not have balance issues. The thruster unit on the back of the MS is also similar to those of the Crossbone Gundam units. Unlike most MS of the era, the Anchor can also utilize rare beam weaponry.

The namesake of the Anchor, this cutter can rotate at high speeds when the head is near an enemy unit. During the Anchor's Heat Dissipation Mode, it splits into a v-fin shape. It can also be used as shield.

A defensive armament connected to the left arm, it can be used as an offensive weapon by rotating the shield at high speeds.

A hidden pile bunker in the leg.

Due to the difficulty in maintenance, most mobile suits of the era do not use a beam weapon. The Anchor is an exception, utilizing a wide beam saber. However it can only be used for 12 seconds, and is unreliable.

The machine gun is connected to the rear skirt armor via an ammunition belt, and it can be used even when it is separated from the manipulator. The machine gun uses live ammunition, as is common in the era.

Two powerful shots stored in the chest, they have high penetrating power.

A large beam saber with an anchor shape. It is meant for 40 meter tall mobile suits, such as the Murasame which was its intended user, but eventually fell into the hands of Ash King. As the Ikarumaru has built-in thrusters, even a smaller MS like the Anchor can use it, but the operational time is greatly shortened due to the lower generator output.

A prototype weapon that was built for the Gundam F89, of which the Anchor is based on. The VSBR are a pair of high-output large beam rifles powered by the Anchor's reactor. As this was in its early development stages, its power and reliability are not comparable to those on the Gundam F90 or Gundam F91. It tends to malfunction after three shots, due in part to the Anchor's lower generator output. They were included on the instructions of the pilot, Ash King, who felt the risk of malfunction was worth bringing such a powerful weapon to the battlefield.

Since the Zanscare Empire's attempted invasion of Earth, the circumstances of MS development and maintenance have drastically changed. The ongoing wars between space states have meant manufacturing and maintenance of MS has become much more difficult. As a result, many mobile suits are older machines that have been repaired or shambled together. The Anchor is one such unit, utilizing the frame of the Gundam F89 and various other MS parts. Exceptions to this are more recent Zanscare and League Militaire mobile suits, which still have some parts available. 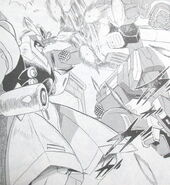 Retrieved from "https://gundam.fandom.com/wiki/Anchor?oldid=450392"
Community content is available under CC-BY-SA unless otherwise noted.