Although Gato is the series' nominal antagonist, he is a man of honor and a soldier through and through who cares for his comrades, and seeks to vindicate the memory of his friends and family who died at the hands of the Earth Federation. He is a charismatic leader, doing his part to rally the Zeon remnants, both in and outside the Delaz Fleet, to support Operation Stardust and fight one last crusade against the Federation (even if it meant dying in the process). The fact he is willing to fight alongside others on the frontlines only endears his men further, and while he holds nothing but hatred for the Federation, he still respects those who fight for it; in fact, he demonstratively sees his opponents simply as misguided, believing that they are sacrificing their lives for a corrupt regime, rather than objects of hatred. Along with this, Gato also recognized skilled and/or determined opponents as equals, as shown with his treatment of Kou Uraki after their duel at Solomon.

During the One Year War, Gato served under Dozle Zabi's Space Attack Force. He participated as a lieutenant in the One Week Battle, the first battle of the One Year War, and was one of those who received an award from Dozle for his war service. In September of 0079, he became a captain and commander of the 302nd Patrol Squadron, of which Karius was also a member.[1][2] He also became good friends with Kelley Layzner, and the two fought side by side during the Battle of Solomon.[3] After the fall of Solomon, he and his squadron acted as the rear guard of the Dolowa as it retreated toward A Baoa Qu, dealing severe damage to the pursuing Federation fleet and earning him the nickname "Nightmare of Solomon".[4]

During the Battle of A Baoa Qu, Gato, piloting his custom MS-14A Gelgoog, deployed from the Dolowa and fought the Earth Federation Forces. After losing his Gelgoog's right arm in battle, he landed on Aiguille Delaz's personal ship, the Gwaden. When Delaz issued the order to recall all forces and retreat, Gato attempted to sortie again in the YMS-09R-2 Prototype Rick-Dom Zwei, but Delaz told him that Dolowa has already been sunk, and convinced him to retreat with him so they can regain their glory in the future.[5]

After the end of the war, he went into hiding in Von Braun, waiting for the right time. At this point, he fell in love with Nina Purpleton.[6][7] However, on U.C. 0081, September 17, he left her behind and rejoined the Delaz Fleet.[8] He had a kill score of approximately 200, though due to the Principality's strict rules on kill scores and the fact that many of his kills were unable to be confirmed in the chaos of battle, his official kill score was around 100.[9] Because of his reputation, he was even written into the Federation Forces' textbook on war history.[10]

Gato returns to the Earth in October of 0083 U.C. as a part of Operation Stardust. He infiltrates Torrington Base to seize the RX-78GP02A Gundam "Physalis", one of the Federation's two new Gundam prototypes, and its equipped nuclear warhead. Though pursued by Federation forces, Gato is able to escape back to space and rendezvous with the Delaz Fleet.

Gato returns to Solomon, since captured by the Federation and renamed Konpei Island. There, the Federation is conducting its Naval Review. Armed with the GP-02's nuclear weapon, he fires upon the Federation fleet, destroying two-thirds of it.

Throughout Operation Stardust, he repeatedly clashes with the Federation pilot Kou Uraki. At first Gato views Kou as insignificant, but develops a grudging respect for him after their second battle at Konpei Island. During this confrontation, the GP-02 is destroyed. Shortly thereafter, Gato meets with Yuri Hasler of the Axis Advance Fleet, and receives the AMX-002 Neue Ziel.

Gato plays a key role in the ultimate colony drop, as he reprograms the thrusters to enable the colony to fall on North America. In the midst of this he is confronted by Nina, who pleads with him to stop; and then Kou, who shoots him. Gato is mortally wounded by the shot, but is able to return the Neue Ziel. Rather than escape, however, he waits for Kou to emerge in his RX-78GP03 Gundam "Dendrobium" and engages him in a final duel. Their duel is interrupted when they are fired upon by Bask Om, using the new Solar System II.

Gato survives the blast, but finds himself surrounded by Federation Forces. Rather than surrender, Gato orders the remaining Zeon troops to charge for the Axis Advanced Fleet. Although they fight bravely, most of the Zeon pilots attempting to break through Federation lines are killed, including Gato, who chooses to kamikaze the Neue Ziel into one of the Federation's Salamis-class cruisers.

During Operation Stardust, Gato has command of his own fleet, which is centered around Gato's flagship, the Musai-class cruiser Peer Gynt. His fleet is destroyed at the conclusion of the operation.

"Solomon, I have returned!": Anavel Gato (from Gundam Perfect File)

Delaz Fleet's declaration of war against the Earth Federation, with Aiguille Delaz, Anavel Gato and Gundam GP02A in the background (from Gundam 0083 OVA) 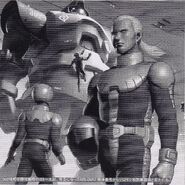 Anavel Gato as seen on MSV-R Legend of the Universal Century Heroes: The Fabulous Shin Matsunaga