Amy Zimbalist (エイミー・ジンバリスト, Eimī Jinbarisuto?) is a fictional character in the side stories of Mobile Suit Gundam 00. As shown in 00V, Amy is an ace mobile suit pilot for the United Nations Forces, and later for Earth Sphere Federation. His main mobile suit is the GNX-604T Advanced GN-X.

Amy Zimbalist is a very sophisticated young man and donned a sweet and easy-going persona. Off the battlefield, he is a ladies man and is very flirtatious with women. It is also implied that he holds long grudges, as seen when he has a desire to take out Celestial Being during the ELS War despite their common enemy.

Amy Zimbalist started off as an atrocious MS pilot, he could barely get a Shell Flag to walk. However, his skills were found to be more compatible with GN Drive Mobile Suits and was allowed to pilot one of the rare Advanced GN-Xs. By A.D. 2314, despite the outdated nature of the Advanced GN-X in comparison to the more versatile GNX-803T GN-XIV and the 5th generation Gundams, Amy kept his Advanced GN-X, unwilling to have it be converted.

There is probably not a person in the world who hasn’t heard the name Amy Zimbalist. This UN war hero has earned the nickname “Steel Cowboy” from his fans and “Devil of Unification” by his detractors. He came into prominence after Celestial Being was defeated. The UN’s plan for the unification of the world included the abolition of national military forces - a mission in which Amy distinguished himself and was soon recognized as an ace pilot and allowed the use of an Advanced GN-X. Being an expert on Mobile Suit development history, Robert had decided to devote a chapter to Amy Zimbalist's personal machine.

Robert first met Amy, who was piloting a Shell Flag then, at the Union's Okinawa base right after the final battle with Celestial Being. Robert could not ever forget Amy's piloting then. He thought it was awful because it took Amy some time to just get the Mobile Suit to walk. Later on, Amy's skills were extremely well-matched to the specifics of piloting machines equipped with GN Drives. Because GN Drive-equipped Mobile Suits use GN Particles for movement and propulsion, controlling them required quite a different set of skills. He was a pilot who seemed to have been born to pilot such machines.

The Advanced GN-X could be tuned to better match its pilot’s abilities. Since he was a Union pilot, his standard equipment included large defense rods on both shoulders. What made his unit special was not its appearance, but its inner settings. He removed the safety limits on the vernier thrusters allowing his suit to fly at incredibly high speeds, like a wild horse. This fighting style is what earned him the nickname “Steel Cowboy.” Effective combat is usually impossible in such a destabilized machine, but he was able to handle it with ease and even seemed to enjoy it. Some even referred to his strength as that of a “Gundam reborn.”

Amy was hired by Wang Liu Mei, and battled with 00 Gundam Seven Sword type while piloting his Advanced GN-X using a simulator. And then he was defeated. After several months, the news about Celestial Being's revival appeared. The data from Amy's simulations battle was presumably used as part of 00's development data.

Amy, piloting his Advance GN-X interrupts Eco Calore who is piloting the GNY-001F2 Gundam Astraea Type F2 while testing the new GN hammer weapon. But before the battle could last a long time, Eco was ordered by Sherilyn Hyde to retreat thus ending the battle.

Assigned to the CB specialty reconnaissance force, Amy embarked on a one week long mission in the GNX-704T/FS Ahead Forcing Scout Type popularly named as "Long Tail". "Why wasn't the cockpit made for two people? This small space would be useful to deepen relationships of two people and to bring love." Amy did not think that his fellow passenger might not be a female. It was said that he would not return until he finds the secret CB base, but gradually, the limit of his machine started to be reached. At that time, his sensors detected the weak heat source of an asteroid. After Amy saw the warning, he used all of his remaining particles to move and bombard the asteroid with his GN Beam Cannon. At the same time, his machine completely become unable to move. After he fired a rescue signal, he could do nothing but pray that his comrades would soon come to assist.

Amy Zimbalist in his Advance GN-X fought Klaus Grado in his personal AEU-09/LS Klaus's AEU Enact Landstriker Package. Klaus had the purpose of separating Amy, who was guarding the base, and in the gap Katharon blew up the base. After the fight, Amy found out that his opponent, Klaus, belongs to the Katharon's third Middle East branch, and swore that he would take revenge on him. However, they never met again.

Hiling Care, who sortied in the GNX-612T/AA Superbia GN-X for the CB’s base destruction mission reminisces about Amy Zimbalist, who reported as a substitute for duty. Amy said that Hiling is “cute”. She is a Combat-type Innovade with no sexual distinction, but as this causes inconveniences when interacting in the human society, each of them pretended to be either male or female. Hiling pretended to be a female, and had no bad feelings when called “cute”.

Deborah was one of the pilots testing the Neo-Hed alongside Amy. After the test, Deborah gave the engineer her frank opinions on the mobile suit. "…Thank you". For the first time, the face of the engineer lit with happiness. But Amy said, "I think it's impossible that it doesn't have a damned head!". After this, the engineer said to Amy, "A head is nothing but a decoration!" They then ended up in a scuffle.

Deborah and Amy sortie against an anti-Federation PMC. Prior to sortieing, faulty parts were found in the GN Drive Tau of Deborah's Advanced GN-X and Amy offered his own machine's parts to Deborah. Deborah launched in her Advanced GN-X and Amy ended up using a normal GN-X. Amy was later shot down, but his machine crashed into a concealed establishment where the enemy leader was hiding. Honoring her bet to Amy that she would go out with him if he did something great during the mission, she went out with Amy to an opera the following day. However, she deliberately under dressed for the occasion, and the pair coincidentally met with Robert who then tagged along to the opera house.

According to Gundam 00V Battlefield Record, Amy Zimbalist sortied in his outdated Advanced GN-X (purely because it was his favourite MS, and because he didn't want to go through the bother of converting it into a GN-XIV). He was nearly killed, but was narrowly saved by one of Gundam Zabanya's rifle bits. Throughout the battle, he shows a great level of curiosity at the ELS, who he thinks of as "monsters", but later finds out that they look more like machines. He also shows a not-too-serious desire to shoot the Gundams in the back despite orders for the ESF pilots to assist the Gundams in any way possible. 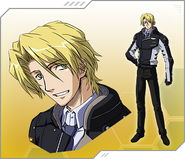 Amy Zimbalist
Add a photo to this gallery

Retrieved from "https://gundam.fandom.com/wiki/Amy_Zimbalist?oldid=474277"
Community content is available under CC-BY-SA unless otherwise noted.