1 of 2
At a spaceport on Earth, a flight to Side 5 Loum was about to begin boarding. Amuro's Haro, was rolling on the spaceport floor, disturbing a couple of passengers, but he managed to catch it but Haro kept on saying "Let me go". Some passengers laughed before Amuro put Haro (now wanting to share profiles with Amuro) back in the box that marketed Haro as a "Lovely Mascot Robot". Crying "wait for me, dad", Amuro caught up with Tem Ray, who told Amuro to quit toddling and not to open the Haro box until later. At the AirUNA check-in for first class passengers, Sayla Mass was with her adoptive father, Don Teabolo Mass and brother Édouard Mass. She had noticed Amuro and his Haro and explained to the wheelchair-confined Don Teabolo that she saw a boy chasing his big toy, Don Teabolo laughed and supposed that Amuro wanted the toy very well [1][2].

At the age of 13, Amuro and his dad were emigrating to the unfinished colony of Side 7 being constructed by Yashima Heavy Industrial. They arrived on the company's shuttle, passing the Luna II asteroid [3].

When the young Bright Noa entered Dr. Ray's room, he noticed a photo of Amuro. At that moment, Dr. Ray had remembered news he heard that children as young as the 15-year-old Amuro were being drafted and considered it terrifying, he stated that once they start mass-producing Gundams, the war would be over, and they could put an end to it without wasting young lives [4].

Amuro Ray's exploitation became popular after the war, and he soon gained the celebrity status among the people, and a target for the Zeon Remnants. One such incident happened in U.C 0082, when Amuro was invited by Hayato, Fraw and the White Bases orphans to visit Izumo-Taisha, a Japanese cultural heritage site that has connection with the Kobayashi's ancestor. Zeon soldiers of Uragang company loyal to M'Quve had infiltrated the crowd, and even one of them, called herself "Yamada", was their tour guide. Hayato expressed his wish to propose to Fraw and begged Amuro not to go between them.[5]

Also, from that same moments, the Zeon remnants made several attempt to assassinate him, but were thwarted by plain-cloth Federation agents who secretly guarded Amuro's life. When the group visited Totoori sand dune, the children were taken hostages by Zeon agents who had been hiding under the sand. In a heroic moment, Hayato used his martial art skill to disable the assassins. The Zeon made a last ditch attempt and started up their replica of the Gyan (also hidden under the sand dune). However, the MS broke down moments after it was revealed. That same night, Amuro and Fraw had a conversation. She told him that instead of taking up the family business, Hayato decided to continue on the military path. On the other hand, Amuro intended to return to Side 7 and help rebuild the colony [6]. 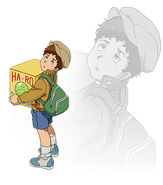 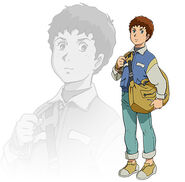 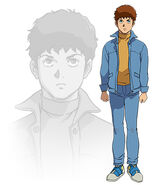 Illustration by CLAMP featured in Volume 2 of the English translation of the manga.

Retrieved from "https://gundam.fandom.com/wiki/Amuro_Ray_(Origin)?oldid=462612"
Community content is available under CC-BY-SA unless otherwise noted.