Based on the frame of the destroyed XM-X2ex Crossbone Gundam X-2 Kai, the Amakusa was developed as a high-performance unmanned, AI-controlled mobile suit. The Jupiter Empire remnants managed to retrieve data from the RX-78-2 Gundam's core fighter to create a brain clone of the famed EFF pilot, Amuro Ray, to operate this machine. Standing at a height of 18 meters, it was considered to be a large-sized MS for its time. The Amakusa also shares many parts with the EMS-06 Batalla, particularly the thruster laden legs as the designers wanted to keep the original number of torso thrusters the same as the original Gundam but still wanted to improve the unit's speed and mobility.

One of the most powerful features of the original Amakusa was the bio-brain of Amuro Ray that possessed all of Amuro's experience from the One Year War but also of his powerful Newtype abilities. With these two combined factors the Amakusa was able to sense attacks and move accordingly to dodge and counterattack, making it a fearsome opponent that would wipe out multiple targets in less than a minute. Only other Newtypes proved to have the strength to keep up with it. The loss of the original and the bio-brain factory forced the Jupiter Empire to make all future Amakusas compatible with flesh and blood pilots whose skills cannot equal Amuro Ray thus weakening the mass production model.

Unlike most mobile suits of the UC 0130's, the Amakusa is not equipped with a beam shield. Instead, to increase its defense the mobile suit is equipped with a solid shield that can block both physical and beam attacks. As with all physical shields that Amakusa's equipment is limited in durability when compared to a beam shield. This is of little concern to the designers of the Amakusa as the true defensive power of the mobile suit lies in the experience and Newtype abilities of the Amuro Ray bio-brain to sense coming attacks and avoiding them. The true power of the shield lies in its offensive powers.

The lower half of the shield possesses a claw that is used for grappling and crushing enemy mobile suits.

The shield possesses two spiked bulging components in its center. These components are two halves to a hammer, developed under the same concept as the original Gundam Hammer, that fold together when released from the shield. This large and heavy hammer is connected to the Amakusa by a chain and is used to bash enemy mobile suits at mid-range melee combat. To increase damage the hammer can spin and add centrifugal force to its attacks.

During the UC 0130's the Jupiter Empire began development of the Amakusa mobile suit for its plans to invade the Earth Sphere. Research, development, construction, and testing would be carried out in a secret asteroid facility that also possessed the equipment to grow and test the bio-brains that would pilot the Amakusa.

In the year UC 0136, Jupiter Fleet Captain Grey Stoke discovered the existence and the location of the Amakusa and convinces the Crossbone Vanguard pirate group, hiding under the disguise of the Blackrow Shipping firm, to help him destroy the Amakusa and the related facility.

When the Crossbone Vanguard breached the facility, the scientist in charge sent out the Amakusa to stop them. With the combat experience and Newtype powers of Amuro Ray the Amakusa proved to be exceptionally powerful, quickly destroying the three XM-10 Flint mobile suits (but not the core fighters) and leaving only the XM-X1 Crossbone Gundam X-1 Kai Kai "Skull Heart" and Gump mobile suits to battle the Amakusa, which was effortlessly dodging their attacks, including a random attack from the Skull Heart's Peacock Smasher, which was considered an impossible feat for anything but a powerful Newtype.

The Amakusa then switched to melee combat, using its hammer to smash the Gump's leg and using its beam sabers to deprive the Skull Heart of its weapons until it only had two heat daggers, two beam shield/brand markers, a screw whip, and a scissor anchor.

At that point Jovian reinforcements appeared but the Amakusa's current simulation combat data had EMS-06 Batalla mobile suits identified as enemies because the Crossbone Vanguard also used Batallas. The Amakusa quickly destroyed the approaching mobile suits, causing enough damage to the base that it began to fall apart.

Knowing of the high probability of defeat, Tobia and Grey devise a plan. First they lured the Amakusa into using its hammer. Once it did Tobia used the Skull Heart's scissor anchor to catch the chain and redirect the attack at the Amakusa, successfully removing the head. In the momentary opening Tobia attacked with a brand marker and sliced through the units chest.

Critical damage having been done and destruction imminent, the Amakusa detached its torso and launched the bio-brain into space; however, it was damaged and it would soon die. Before its death, the bio-brain reached out with its Newtype senses and guided the trapped Tobia and Grey out of the wreckage of the base to safety.

With the loss of the Bio-brain and the research facility the Jupiter Empire had little chance of ever replicating Amuro Ray again. Though the Amakusa would be mass-produced, the bio-brain control feature was removed and replaced by a standard cockpit.

Later mass-produced Amakusas would be part of a Jovian attack force on an SNRI research facility, their mission to destroy the F99 Record Breaker mobile suits before they can be used to get the Crossbone Vanguard back to Jupiter in time to stop the colony laser attack. All of the Amakusas were destroyed by the three F99 Record Breaker prototypes.

Despite the test type's destruction at the hands of the Crossbone Vanguard, the Amakusa performed admirably, and was thus chosen to become the new Jupiter Empire's mainstay mobile suit. For mass production purposes, the more unorthodox elements are removed, such as the weapon-laden shield being replaced with a standard beam shield. Additionally, while the original Amakusa was controlled by a bio-brain unit, the production version is simply a standard piloted machine. 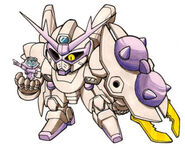 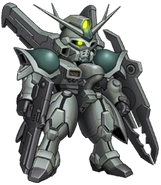 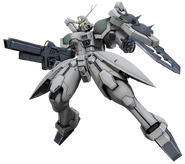 Retrieved from "https://gundam.fandom.com/wiki/Amakusa?oldid=449951"
Community content is available under CC-BY-SA unless otherwise noted.