Allenby Beardsley (アレンビー・ビアズリー, Arenbī Biazurī?) is a character that appears in the anime Mobile Fighter G Gundam. She is the Gundam Fighter for Neo Sweden in the 13th Gundam Fight and is one of the youngest fighters, as well as the only female fighter to participate in the tournament.

Allenby's success was a gilded image behind a series of cruel military-run experiments to create the perfect Gundam fighter. Orphaned at a young age, she was taken in by the Neo-Swedish Space Forces and spent the majority of her life training. The key to her success was the Berserker System, which used radio frequencies to turn her into an uncontrollable savage. When not fighting, she is a free-spirited, kindhearted, and witful person. Much to the ire of Domon's partner Rain Mikamura, Allenby is somewhat of a flirt, tending to stick with Domon despite being from another nation. When she was forcibly placed under the control of both the Berserker System and the DG Cells, she became extremely savage and wanted nothing more than to fight Domon. After being freed from the DG Cells, she went into space with the other Gundam Fighters to assist the Shuffle Alliance in freeing Rain from the Devil Gundam. When Domon is at his lowest point, Allenby tells him to just tell Rain how he truly feels, but also says that she had fallen in love with Domon. She explains to him that the only way she can get over him and move on with her life is if he admits his feelings for Rain. Otherwise, she fears that she'll always be holding out hope that he might care for her as deeply as she cares for him.

Though Allenby was a good fighter due to her prior training, Neo Sweden Forces opted to use the Berserker System to finish a fight. This boosted her fighting abilities by 120% and made her virtually unstoppable. Due to the controversy of using such a system, she remained relatively obscure until Wong Yunfat put her against Domon to test her abilities.

Allenby met Neo Japan Gundam Fighter Domon Kasshu in a gaming arcade where she had been winning all her matches in a fighting simulator, until she tied with Domon. In her match with him, Domon was able to overload the Berserker System by reaching out to Allenby. While the resulting trauma caused Allenby to lose the match, the technicians behind the system discontinue its use, reasoning that Allenby no longer needs it. She becomes Domon's close friend, and even develops feelings for him, all to the great distress and silent jealousy of Rain Mikamura. Master Asia at first thought Allenby was just a fighter who gets lucky, but after a match with Domon, Master Asia admits he was wrong about her and he thinks she has what it takes to be a great fighter. Allenby finds a common bond with Domon due to the fact that they both became Gundam Fighters against their own will.

Later, Wong would make a copy of the Berserker System and use it to disrupt Allenby's tag team match against Andew Graham and Argo Gulskii. He kidnapped her in the resulting chaos after the match and infected her with DG cells. By also using the Berserker System, he turned her into "Devil Allenby" to pilot the Walter Gundam. Wong intended to use her to pilot the Devil Gundam itself, but was stopped by Rain Mikamura in the JMF1336R Rising Gundam. After becoming disinfected, she would return with Neo Nepal's Kyral Mekirel to form the World Gundam Federation, a collection of all the remaining Gundams that were eliminated. The group led an attack against the Devil Gundam, which had absorbed the Neo Japan Space Colony. In the final battle she, along with the Shuffle Alliance members, help Domon express his true feelings to Rain, which resulted in the destruction of the Devil Gundam. While encouraging Domon she tells him,

Following the end of the battle against the Devil Gundam, she can be considered the only surviving member of the Four Heavenly Kings.

Allenby shares her advice to Domon on saving Rain. 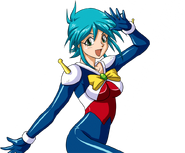 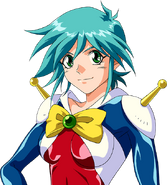