The Alexandria is a class of space cruiser introduced in the anime Mobile Suit Zeta Gundam.

A second generation space warship based on the former Principality of Zeon's Musai-class,[1] and incorporating technology from the Pegasus-class, the Alexandria-class heavy cruiser was the first in a new series of Earth Federation space cruisers specifically designed with the use of mobile suits in mind. Developed after the One Year War, it was deployed preferentially by the Titans. Its operation capabilities are equivalent to four Salamis Kai-class space cruisers, and has a total of four catapults, two on each side of the bow. The ship's interior facilities are no different from most ships of the time, but they are designed to be spacious and habitable. One of them was a private room for officers, which was also equipped with a shower room.

Like the Musai-class, the engine and other parts of the Alexandria-class are made of blocks. The block at the rear of the bow is the MS deck, and by separating it from the catapult, the operation sequence can be separated and maintenance work can be performed more efficiently. The engine section is divided into a central block and a left and right block. The structure of the left and right engine blocks is also influenced by the Musai-class, but it also has its own unique structure, such as the heat dissipation plate on the side of the engine block. It is armed with a large number of mega particle guns and anti-aircraft guns, and has the firepower of a strike ship.

The primary armament of the Alexandria-class was her four two-barrel beam guns. Two on each side of the mobile suit hangar. The Hario refit incorporated two more of these guns on the left and right sides of the main bridge module.

These weapons are located on the outboard sides of the engine pods on the original class, Hario refit, and Aswan refit. On the Gaunland refit, these guns are moved to the dorsal hull of the bridge.

The standard defensive armament on the original and Hario refit, these two-barreled machine guns were designated for AA/AMS defense. The ship is equipped with a total of four, two at the top of the bridge, and two at the top of the engine blocks. The Hario refit omits the anti-aircraft guns on the bridge for additional twin mega particle cannons, and the Aswan refit is equipped with an additional two twin anti-aircraft guns on the engine blocks.

A single-barreled machine gun designated for AA/AMS defense, two of these guns are mounted on top of the mobile suit hangar and another two on the sides of the ventral hull on the original design, Hario refit, and Aswan refit.

An upgraded defensive armament equipped on the Gaunland refit, they replaced the two-barrel and single-barrel variant and the overall number of anti-aircraft guns was increased to ten for greater AA/AMS capability, three on each side of the hangar bay and two on each side of the bridge tower.

An additional armament placed on the Gaunland refit, these missile launchers enhanced the ship's anti-ship and anti-mobile ship capabilities. Four launchers are located in each protrusion on either side of the launch catapult.

A protective device placed on the Gaunland refit, it generates a membrane-like beam to defend against attacks.

The Aswan Kai variants can mount up to four large spherical fuel tanks to increase its operational range, two attached to each engine block.

The Alexandria-class first entered service following Operation Stardust and the subsequent founding of the Titans on December 4, U.C. 0083. The Al Giza, one of the first completed ships of the class, was mostly crewed by former crew members of the Albion, who joined the Titans.[2][3]

During the Gryps War, the Alexandria-class served as the main ship of the Titans. During which, three ships of the Alexandria-class were refitted. One was the Hario, a ship that was used by the Titans, which was modified to include additional aft firepower (the aft quarter being a traditional weak fire zone in space warships), which was the personal ship of Paptimus Scirocco during the early stages of the Gryps War. Another vessel modified for the Titans Test Team was the Aswan, which had its aft bridge section modified to contain a secondary mobile suit bay.

Most of the ships in this class were operated by the Titans and did not go to the regular Federation forces, so the Alexandria-class did not become a mainstay, but production itself continued. Later, after the 0090s, the Clop-class became the mainstay of the cruiser class, and this class was treated as a reserve auxiliary ship, although it had undergone some modernization.

Decades later in 0153 the last Alexandria-class ship from the Earth Federation Space Force, the Gaunland, a ship of that class, was recommissioned and refitted by the League Militaire to act as their flagship against the invading Zanscare Empire. Included in the Gaunland refit were two additional MS catapults in the aft, as well as additional beam turrets and a set of missile launchers. The Gaunland gave honorable service to the League Militaire while acting as the flagship and later as a decoy vessel that assisted in the defeat of the Keilas Guilie fleet. 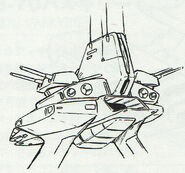