Aleksandro Hemme is the chief gunnery officer of the Jormungand in Mobile Suit Gundam MS IGLOO: The Hidden One Year War.

The chief gunnery officer Aleksandro Hemme was assign to the Jotunheim for the testing of the QCX-76A Jormungand, a large and powerful long-range plasma cannon capable of taking out a battleship in single shot. However, the weapon's maiden appearance at the Battle of Loum becomes its last, Aleksandro fires the Jormungand's cannon at the enemy, but misses several times. Without any data to put in the Jormungand is useless. Then a new member of the Zeon arsenal soon arrives to prove the Jormungand obsolete the MS-06C Zaku II Early Production Type. As Char Aznable's force decimate the Federation armada and the Jormungand completely neglected. A Magellan-class battleship heads toward the Jotunheim. Chief Gunnery Officer Lt. Aleksandro Hemme uses the last glory of the doomed serpant to take down a Federation Magellan, ending the Dreadnaught era of the space warfare. 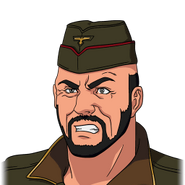 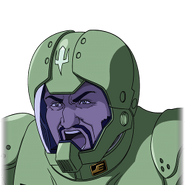 Retrieved from "https://gundam.fandom.com/wiki/Aleksandro_Hemme?oldid=482740"
Community content is available under CC-BY-SA unless otherwise noted.