Alec Led is a character from the manga Gundam SEED Frame Astray. Born as a Coordinator from PLANT, he became Mobile Suit pilot for ZAFT during the Second Bloody Valentine War. Assigned to the Republic of East Asia he piloted an all-white custom painted Kerberos BuCUE Hound. Alec served as acting commander in the region untill Commander Leons was assigned the position. 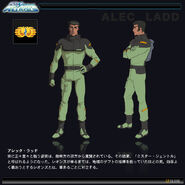 Retrieved from "https://gundam.fandom.com/wiki/Alec_Lad?oldid=137976"
Community content is available under CC-BY-SA unless otherwise noted.