Alberto Vist is the firstborn son of Vist Foundation head Cardeas Vist from his first marriage. His mother was Ellen Vist. Growing up, Cardeas would preach an ends-justify-the-means philosophy to his son to defend the unscrupulous actions that Cardeas often took for what he believed was the greater good. In truth, Alberto hated this philosophy and it strained his relationship with his father and instead made him grow closer to his Aunt Martha Vist Carbine.[1]

Eventually, Cardeas would leave his wife and enter into a relationship with Anna Links, who bore Cardeas his second son Banagher Links, Alberto's half-brother. At the time of Bangaher's birth in 0080, Alberto was a 17-year-old boarding school student away from his father, and thus did not know about Banagher or the fact he was his half brother.[2]

Alberto would grow up to become an Anaheim Electronics executive. He comes to Industrial 7 in order to block the transaction between the Vist Foundation and the Sleeves. A staff of Anaheim Electronics who board the Nahal Argama to stop the opening of the "Laplace's Box". He has attachment to the "Unicorn" and regards Banagher Links, Daguza Mackle and the others as a threat. He seems to have a short-temper and uses violence against Banagher who opposed him for having spoke ill of Cardeas. As it turns out, he is actually Banagher's half-brother born from a different mother.

Alberto was ordered by his Aunt Martha Vist Carbine to stop his father's rash decision to hand Laplace's Box over to the Neo Zeon remnant known as the Sleeves. To that end, he joined the Londo Bell taskforce sent to the Industrial 7 colony where the exchange was taking place. Alberto personally confronted his father and tried to arrest him. Cardeas realized that Martha put him up to this and that Anaheim was using the military to accomplish their goals. Cardeas then snapped the neck of Federation soldier and used his body as a shield against an Anaheim guard firing on him, before shooting him in the head. But Alberto took advantage of the distraction to mortally wound his father.

Alberto then returned to the Nahel Argama, which had picked up the RX-0 Unicorn Gundam, supposedly the key to Laplace's Box. He was on the bridge when he overheard one of his technicians, Aaron Terzieff, who was attempting to open the hatch and find out who the pilot is, mentioning the Vist Foundation's involvement in the U.C. Project. Alberto was taken aback by this comment, and asked over the comm what relevance it had with the situation at hand; the bridge crew inform him that the comm is closed. Realizing the Commander Daguza Mackle would interrogate Terzieff, Alberto hurried to the hanger deck to stop Mackle from prodding any further. As Alberto float uncontrollably in the zero-G environment, Mackle then contacted Captain Otto Midas, advising that they head to Luna II. Alberto agreed with him but instead suggested that they head to a closer location: Anaheim HQ at Von Braun on the Moon. The two began arguing; Mackle knew that the Sleeves would intercept if they head to the Moon, whereas Alberto was confident that they could make it there without incident. The argument soon escalated to disagreement over corporate interference with the military command structure and what orders a soldier has to follow. They soon managed to open the Unicorn's hatch, revealing Banagher inside, unconscious.

The Sleeves soon discovered the Nahel Argama's location when Midas impulsively ordered his crew to fire on the derelict Salamis-class cruiser above them. Alberto blamed Midas over the comm before he was cut off. Once he got into a normal suit, Alberto made it to the bridge, insisting that they withdraw and head to the Moon. First Officer Liam Borrinea warned him that it's dangerous for him to be on the bridge, but Alberto saw a more concerning matter: they were facing the MSN-06S Sinanju, the Red Comet. He explains that Neo Zeon stole the prototype suit two years ago during a transfer from Granada to Von Braun. The Federation forces that were sent to retrieve it were completely wiped out. And they say that the pilot responsible is Full Frontal, the man they're calling the Second Coming of Char Aznable. Borrinea backs up this story to Midas, having heard that Frontal took out two Clop-class ships singlehandedly. Midas finds it impossible, as Char went MIA in the Second Neo Zeon War. Yet Alberto pointed out regardless, the Nahel Argama's mobile suit squadron don't stand a chance. The Unicorn was created based on data from the Sinanju; he passes a data disk with the Sinanju's schematics and insisted that they leave immediately. But a pragmatic Midas knew that if they run, they risk being attacked from behind. Instead, he orders his crew to transfer to the data to each section of the ship and the MS corp. Alberto called him an idiot with no concept of what he's dealing with but Midas refused any more insolent behavior towards him.

Then suddenly, Mackle and Conroy Haagensen enter, revealing that they have discovered the Princess of Zeon, Mineva Lao Zabi, on board the ship, having been rescued from Industrial 7 by Ensign Riddhe Marcenas. Mackle attempted to negotiate safe passage, only for Frontal to make a counter-demand: either they hand over the Unicorn, or he'll destroy their ship and gave them three minutes to make a decision. Mackle believed that he was bluffing; he wouldn't risk the Guiding Star of Zeon. However, Mineva disagreed; if Frontal is the reincarnation of Char, then he holds the Zabi family responsible for the death of his father Zeon Zum Deikun. Mackle took note of her reasoning, seeing it as proof that she is the Princess and could guess that a number of Sleeve soldiers still believe in the Zabis. Mineva told him that if he truly believed that, then he should continue his fruitless negotiation but warns that Zeon won't be as merciful. She gives an analogy: Zeons would destroy any evidence of Laplace's Box. Alberto agreed with her and insisted that they destroy the Unicorn's electronic system, so that the Gundam won't open the box; Haagensen restrained Alberto, as the comm was still open and they didn't want the Sleeves to hear that they are desperate. Mineva encourages Mackle to pull the trigger, take her life and destroy the Unicorn. Before Mackel could do the deed, Banagher enters the bridge, insisting that it's wrong to use Mineva as a hostage. Mineva refused to budge and Mackle told Banagher that what they are doing is in the best interests of humanity. Seeing the dilemma they are in, Banagher decides to take the Unicorn to take out Frontal/Sinanju. Alberto helps him get set up in the Gundam, but their actions did not go unnoticed by the bridge. As soon as Alberto returned, Mackle lunged at him. Alberto reasoned that even an untrained pilot can use the Unicorn effectively to buy them some time; Mackle perceived this to be as good as giving Zeon the box. Alberto defended that the Unicorn is just the key and Banagher would probably get it destroyed. He then moved over to the comm to instruct Banagher on the Unicorn's NT-D system. However, within several minutes, Alberto's gambit failed, as Banagher/Unicorn was captured.

Federation intelligence traced Banagher's location at Palau, a civilian mining colony belonging to Side 6. Alberto gave the debriefing to several Federation officers. Though many found it unlikely that a single ship could break into that fortress alone, Alberto reminded them that ECOAS had jurisdiction on the mission and mentioned that two ECOAS teams working together was unprecedented. One officer saw that they didn't have enough troops to pull this off and perceived that HQ was asking them to die in battle. Alberto claimed that they had taken every precaution in any emergency, reasoning that it would be good enough for a covert operation. However, the other officers weren't interested in his opinion and began to throw blame at him for getting the Unicorn captured. Alberto tried to defend his reasoning, before Midas stormed out. 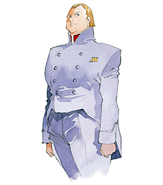 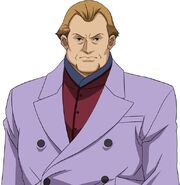