Alan first appears to arrive in Shinjuku with the rest of the Shuffle Alliance to drive off Master Asia and the DG Cell infected Gundam Fighters with him that represent Neo America, Neo France, Neo China, and Neo Russia when they have current King of Hearts and Neo Japan Gundam Fighter Domon Kasshu at their mercy. Shortly thereafter, joining with Domon, Rain Mikamura, and the other Shinjuku government agents, a JDG-009X Death Army suit arrives with a message for Domon from Master Asia to meet him at the Tokyo Tower, alone. Sensing a trap, the Shuffle Alliance caution Domon against going, but he still decides to answer the summon.

When it turns out he was lured into a trap by Master Asia and faces his DG Cell infected friends again, he is rescued by the Shuffle Alliance, having guessed they were right that it was a trap. Alan faces off with Sai Saici, the Neo China representative, but when the Shuffle Alliance easily beats their opponents in one-on-one faceoffs, Sai decides to up the ante by bringing out his GF13-011NC Dragon Gundam, causing the Shuffle Alliance to summon their own suits to even the playing field. However, after one powerful attack, Alan and the other members realize that Sai and the other infected fighters are their successors as Domon's Shuffle Alliance teammates. After a difficult decision to make, the Shuffle Alliance launch a suicidal dive on the infected fighters, who can only look up and scream in horror when they realize the Shuffle Alliance's intentions before the attack connects and Sai and the others are knocked unconscious. Alan gives up his life to purge Sai Saici of his DG Cell infection and pass his crest as the Club Ace to the young fighter before his Club Ace turns to stone and crumbles to dust. When Sai Saici comes to afterwards, completely back to normal, he's shocked to find his new crest on the back of his hand. When he learns of how he got it, he is ashamed of what he could have done under the Devil Gundam's influence, betraying his Shaolin ideals for power and greed. As a result, he decides to renew his obligations to revive the Shaolin Temple and pledge his help to Domon.

Alan appears one more time after Master Asia is defeated by Domon on Lantau Island to congratulate Master Asia on his honorable defeat, and to welcome him to the afterlife as he earned his rest as Master Asia passes away in Domon's arms, satisfied that his crest as the "King of Hearts" is in good hands with Domon now. 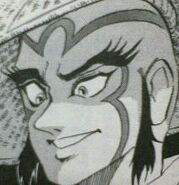