Aisha is a generally upbeat and easy-going person. She is very supportive towards Andrew Waltfeld, being a devoted partner, both on the battlefield and in their private lives.

This glamorous, coquettish young woman is also a capable strategist and mobile suit pilot. When Waltfeld enters battle in his two-seater command mobile suit, Aisha puts her abilities to use as his gunner, so that her beloved "Andy" can concentrate on his piloting.

After the Blue Cosmos Attack in Banadiya, Andrew brought Kira Yamato and Cagalli Yula Athha to his and Aisha's estate, and left Cagalli with Aisha to get her cleaned up. Aisha provided Cagalli with a stylish dress to wear, and laughed along with Andrew when Cagalli got mad at how Kira was shocked by her in a feminine outfit.[1]

During the Battle of Talbadiya, Aisha co-piloted the and TMF/A-803 LaGOWE with Andrew, taking the gunner's seat while Andrew was in the pilot seat. The two of them fought an intense battle against Kira and his GAT-X105+AQM/E-X01 Aile Strike Gundam. At the battle's end, Kira pierced the LaGOWE with one of the Strike's Combat Knife, destroying the machine. Before she died, Aisha got out of her seat and embraced Andrew before the LaGOWE exploded.[2] 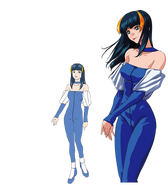 Andrew and Aisha in pilot suits (The End of the Sandstorm, HD Remastered)

In Pilot Suit (1) (The End of the Sandstorm, HD Remastered)

In Pilot Suit (2) (The End of the Sandstorm, HD Remastered)

Andrew & Aisha's Last Moments Together (The End of the Sandstorm, HD Remastered)