During the One Year War, Delaz held the rank of Colonel. Originally, he served in the Solomon Defense Force, part of the Space Attack Force led by Dozle Zabi, as the captain of the Gwazine-class battleship Gwaden. However, he was a Gihren Zabi loyalist, and during the Battle of A Baoa Qu, he was assigned as the commander of Gihren's personal fleet.[1]

During the battle, Delaz was informed that Gihren had been killed in action and that Kycilia Zabi was assuming command. Seeing this as a coup by Kycilia, Delaz chose to withdraw from the final battle at A Baoa Qu, forfeiting that hopeless fight in order to strike back at the Earth Federation later on.

At his makeshift headquarters, the "Garden of Thorns", in a debris-strewn shoal zone, Delaz promoted himself to Lieutenant General and spent three years gathering his forces by either raiding or pirating supplies and resources throughout the Earth Sphere. Overall the Delaz Fleet was the largest and most organized Zeon Remnant force outside of Axis. After receiving information on the new Gundam project, Delaz forms the master plan he calls Operation Stardust, which was duly commenced in UC 0083.

Stardust coupled asymmetrical tactical complexity with collusion from many Zeon-friendly contacts made in the civilian and commercial hierarchies. Combined, these factors allowed Delaz to achieve an immense military and propaganda victory with remnant forces a small fraction of the size of the former main Zeon fleet.

When Gato returned to space in RX-78GP02A Gundam "Physalis", Delaz announced the launch of Operation Stardust to the entire Earth Sphere. This move was seen at the time as being grandiose but was actually a en masse signal to all remaining Zeon Remnant forces to come join his operation. Delaz recruited several units and factions to his fleet including Cima Fleet led by Cima Garahau. This would prove to be his fatal mistake. The Cima Fleet which had for the past three years operated as pirates were planning on betraying Delaz. Cima tried several times to betray the Delaz Fleet before it launched Operation Stardust and were thwarted inadvertently by the Albion.

The Federation believing that Delaz plans to attack either the Naval Review or Jaburo directly with his fleet plan to counter his moves with overwhelming force. However while Delaz does send Gato out to attack the Naval Review with a devastating nuclear strike. While the Federation was caught off guard by this sneak attack them feel Delaz has played his trump card. However this was in fact a spoiling attack, meant to throw the Federation in order chaos while Delaz went for his real goal, hijacking a empty colony being transported after repairs. Through convert support gained by threatening the Lunar cities, the colony is powered allowing it to propel itself on a course for Earth. While Delaz force are positioned for their greatest triumph Cima made her move. Boarding and taking over the bridge of Delaz's flagship, Cima's marines murder most of Delaz's command crew and take him prisoner planning to turn him over to the Federation. Delaz tries to reason with Cima with her throw back at him her rage towards Zeon and how she would now look out only for herself. When Gato approaches the ship to confront Cima, Delaz commands him to see the Operation through and destroy the bridge. Cima enraged by Delaz diehard actions shoots him.

Delaz's death didn't prevent Operation Stardust from going forward it did official put an end to the Delaz Fleet as an organized force.

Delaz's most trusted soldier is Anavel Gato, a Zeon ace from the One Year War who would serve as the crux of the whole operation. In the intervening years before the launch of Operation Stardust, Delaz firmly imparted upon Gato his fanaticism toward the ideals of Gihren Zabi and that Zeon was sold out by the weaken political leadership. The ensuing time between also saw Delaz craft a sort of Lost Cause narrative of Zeon which revolved around seeking the freedom and safety of all Spacenoids, despite Zeon genocidal operations against several Sides during the War. This ideology creates a following among the remaining Zeon factions, and while not totally true on its conception it becomes relevant after Operation Stardust when the Titans begin their repressive campaign against the colonies.

Delaz had always known that Stardust was a one-way trip, but he strove to meet Stardust's objectives because of his two main goals: to weaken the Federation militarily and "to inspire the next generation of Zeon". Both goals ended as failures despite Stardust's spectacular success. First, although two-thirds of the Federation Fleet was destroyed in the Konpei Island debacle, the Federation Headquarters in Jaburo was still intact; by the time of the Gryps War, the Federation had seemed to have regained its former strength. Secondly, until the latter stages of the Gryps War, there were no significant Neo Zeon movements, and Haman Karn's return failed to revitalize the old Zeon spirit among the civilian population, even at Zeon's homeland of Side 3. In addition, Operation Stardust provided Federation's hardline hawk factions the perfect political excuse to form the later feared and oppressive Titans taskforce.

Delaz Fleet's declaration of war against the Earth Federation, with Aiguille Delaz, Anavel Gato and Gundam GP02A in the background (from Gundam 0083 OVA)

Aiguille Delaz being tortured by Cima Garahau, as seen on Mobile Suit Gundam 0083: Hero of Stardust 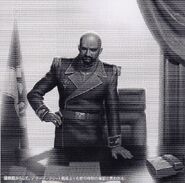