Though she has very strong ideals and beliefs, she also has a tendency to blame herself when things go wrong and can be very emotional. Aida has also shown that she likes to dance.

Due the Rayhunton Code installed in the cockpit of the YG-111 Gundam G-Self, she is one of the three people who can pilot it. Aida is assigned the MSAM-033 Gundam G-Arcane and often uses it Anti-Ship Rifle to provide support fire for her allies, while staying close to the Megafauna.

Aida was adopted as the daughter of Amerian General, Gusion Surugan and later joined the Pirate Corps. After they got control of the G-Self, she became its pilot as the other pirates could not activate it. She assaulted the crown carrying the 1010th class of Capital Guard space cadets as a distraction while the other pirates stole photon batteries from the bottom of Capital Tower. Among the cadets was Bellri Zenam, neither of whom realized they were siblings. Bellri used a Recten to defend the tower and she is captured as Captain Samatar and Luin Lee came to his assistance and the G-Self appeared to have been not working properly. She refused to reveal her identity as the daughter of an Amerian general when she was interrogated by Captain Samatar and by noting she isn't part of the military and using the alias Aida Rayhunton (アイーダ・レイハントン, Aīda Reihanton?) for which she gets slapped.

As she did not know Bellri was her brother, she was surprised when he managed to open the hatch to the cockpit of the G-Self, activate the Rayhunton Code and retrieve the Starter.[1]

Aida Surugan as seen on Gundam Reconguista in G (manga) 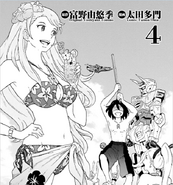 In Gundam G-Arcane's cockpit (Gundam Reconguista in G: From the Past to the Future)