The Agile is a ZAFT Attack Helicopter that first appeared in Mobile Suit Gundam SEED.

The Agile is a helicopter designed for anti-ground combat and mobile suit support. It has a single rotor and relies on the four thrusters to provide counteracting force to the rotor, and to provide propulsion. The rotors can be fixed to become fixed wings, and in this configuration it can reach a speed of 615 kilometers per hour. It is equipped with a single-barrel gatling gun, and four missile launchers.

The Agile was used by ZAFT in various places throughout the First Alliance-PLANT War, among others in North Africa to assist Andrew Waltfeld's Attack on the Archangel[1] and during the Battle of Talbadiya.[2] After the Second Equatorial Skirmish, one Agile was piloted by Nicol Amalfi to search for Athrun Zala, who was lost on a deserted island.[3]

Firing a Missile and Machine Cannon (The End of the Sandstorm, HD Remastered)

Several Agiles (The End of the Sandstorm, HD Remastered) 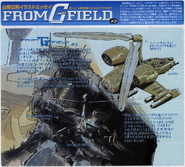