Agar (エイガー, Eigā?) is a short-fused Earth Federation pilot from the Mobile Suit Gundam: Zeonic Front video game, and has an antagonist role in the game.

Agar is easily agitated by battle, and is prone to rushing into battle often without restraint. He has an openly fatalist view on war, viewing any enemy allowed to retreat as a potential threat later. Despite his ferocity, Agar drastically overestimates his own piloting ability, and looks to the power of new-model mobile suits to make up for his shortcomings, usually with disastrous results.

In the novel version, he is an expert in the artillery of the Federation Forces, having devised a strategy to defeat the Zaku with a Type 61 Tank.

Agar is an Earth Federation pilot tasked to the Pegasus-class ship SCV-73 Blanc Rival at Jaburo. On November 30, 0079, the Midnight Fenrir Corp special forces team found the ship, and Agar was forced to launch in the incomplete RX-78-6 Mudrock Gundam. Despite the Gundam's firepower, it was damaged along with the ship. Mudrock was repaired and later upgraded, being deployed to California Base to assist in its recapture. However, Agar once again found himself against the Midnight Fenrir, and the Mudrock was significantly damaged, so much so that Federation engineers thought it was pointless to be repaired again. Afterwards, he pursued the Fenrir's troops to Africa, but when he found their base, A Baoa Qu fell and the war came to an end, so he went to Zeon's side as a military envoy to recommend surrender.

After the end of the Delaz Conflict, he was transferred to the Titans. During the uprising of the Zeon remnants in Aires City on the Moon in the year 0084, he boards the GM Cannon II and suppresses the uprising with Ford Romfellow. While there, he obtained information on a hidden vapor bomb from civilian Matt Healy and others, but was later reassigned due to the effects of the bomb. Still, he contributes to the suppression of Operation Silver Lance, a terrorist attack on the Republic of Zeon by the Wolf's Hammer, but is later demoted two ranks and expelled from the Titans, and becomes a MS instructor with Ford. 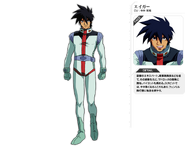 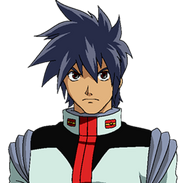 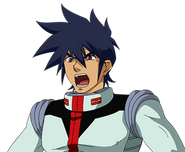 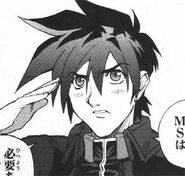 Agar as a member of Titans