The Agamemnon-class is a carrier spaceship introduced in the anime Mobile Suit Gundam SEED.

Often utilized as the flagships of the OMNI Enforcer's space fleets, the Agamemnon-class is the largest warship in the faction before the development of the Archangel-class assault ship The Agamemnon-class is armed with a pair of Dual High-energy Beam Cannons, eight Large Missile Launchers, and an unknown number of Anti-Air Guns for defense. Most ships of this class are also accompanied by smaller warships, such as the Drake-class, for added protection.

Thanks to its large hangar, the ship can carry a sizable number of mobile suits or mobile armors, which can also serve as its defense units. Initially, it was designed to carry only mobile armors, which are deployed rapidly using the linear catapults on its left and right sides. During the later stages of the First Alliance-PLANT War, the Agamemnon-class was modified to carry mobile suits. After the war, further modifications resulted in the Agamemnon-class' dual linear catapults being replaced with a single linear catapult located at the front of the ship.

On February 14, C.E. 70, the Roosevelt was the ship from which nuclear missiles were fired to destroy the PLANT colony Junius Seven. On February 11, CE 71, the Agamemnon-class ship, the Menelaos, under the command of Rear Admiral Lewis Halberton who commanded the 8th fleet, met with the Archangel, which it would protect. However, the fleet was attacked by ZAFT during the Battle of Orbit and the Menelaos itself was sunk together with many other vessels of the fleet.[1]

On September 26, C.E. 71, four Agamemnon-class ships, among them the Washington, Doolittle and Oda Nobunga, carried several nuclear missiles and TS-MA2 Moebius mobile armors for attacking the PLANT homeland. The Oda Nobunaga was later destroyed by Mikhail Coast and his men.[2] The Doolittle, which was commanded by Blue Cosmos member Captain William Sutherland, was eventually sunk on the last day of the First Alliance-PLANT War by Yzak Jule in his GAT-X102 Duel Gundam.[3] Several other Agamemnon-class ships also took part in the Second Battle of Jachin Due, with many of them being destroyed.[3]

One Agamemnon-class ship, the Ortygia was commanded by Captain Meriol Pristis, a member of the Eurasian Federation's "Task Force X" and usually stationed at the Artemis space fortress. This ship served as the base of operations of Canard Pars during his time as a pilot for the Eurasian Federation. From this ship, Canard conducted several missions, until Garcia ordered his arrest. The crew of the ship however remained loyal to Canard and defected. Afterwards, the crew become a mercenary group known as "Mercenary Unit X" and the Ortygia served as their base. Sometime after the war ended, the Ortygia was modified with a Positron Reflector, taken from a refitted Drake-class cruiser, on its bow.

When the Second Alliance-PLANT War started, one Agamemnon-class ship commanded the fleet attacking Aprilius One with nuclear weapons. The entire fleet was destroyed when ZAFT's Neutron Stampeder weapon detonated the nukes still in its hold. Several other ships of this class also took part in other space battles of this war.[4] Near the end of the War, several Agamemnon-class ships were seen with a fleet of Izumo-class, Nelson-class, and Nazca-class to attack the Requiem on the lunar surface.[5][6]

The Menelaos and the Gamow shooting each other. 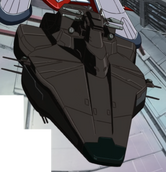 Is a meta-reference to Heinlein's novel Starship Troopers where the smallest starships are named after footsoldiers. Upon reading some of their names, Filipino protagonist Johnnie Rico remarks, "There ought to be one named Magsaysay."