The Gundam Wiki
Register
Don't have an account?
Sign In
Advertisement
in: After War, Series, Television Series
English

Taking place 15 years after the 7th Space War, the surviving 98 million residents[1] of Earth try to make a living as best they can in the post apocalyptic landscape. Mobile Suits and weapons left over from the war fall into the hands of civilians as well as other organizations on the planet. In an effort to keep the past from repeating itself, Jamil Neate brings together a crew of Vultures to search for Newtypes and protect them from being exploited. As they try to carry out this task, an old government rises from the ashes to try and unify the Earth as other forces slowly fan the flames of war once more between the newly formed New United Nations Earth and the Space Revolutionary Army. Now the crew of the Freeden face a multitude of enemies as they try to prevent another catastrophic war.

It was the second Gundam series to be directed by Shinji Takamatsu who had previously co-directed Mobile Suit Gundam Wing with Masashi Ikeda. Other returning staff included producer Hideyuki Tomioka, mechanical designer Kunio Okawara among others.

After War Gundam X was plagued with problems in its initial run, resulting in the number of episodes having to be cut short, much like that of the original Mobile Suit Gundam. The series slowly started to fall out of favor with the fans as it took a different approach in having it based mostly on Earth.

The series originally aired on TV Asahi from 1996-04-05 to 1996-12-28. Due to the poor ratings there were multiple time slot changes for the series, pushing it back further and conflicting with other shows airing at the time. These time slot moves caused the producers to start dropping out of the series. Not wanting to end the series abruptly, changes were made to compress the remaining episodes and complete the series.

A Tagalog dub produced by Telesuccess Productions also aired on GMA in the Philippines from June, 2001.

On March 2, 2016, at 15:03 CST, Nozomi Entertainment announced first ever North American release of After War Gundam X. Collection 1 will be released on DVD on June 7, 2016, coinciding with the Mobile Suit Gundam ZZ Collection 1 Blu-ray release. It will have Japanese audio with English subtitles.[2] On April 6, Nozomi Entertainment had announced that the second collections for both series would be available on July 5th.[3] 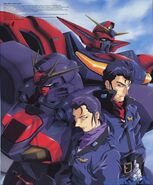