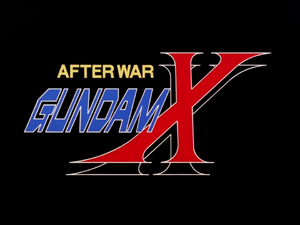 After War or AW refers to one of the timelines in the Gundam anime meta-series.

The After War period starts following the massive colony drops that brought an end to the 7th Space War and killed 99% of humanity living on the Earth's surface. The third of a series of Gundam anime's made in the 1990s that take place in an alternate universe, following the success of Mobile Fighter G Gundam and New Mobile Report Gundam Wing. In addition to an anime, the After War timeline also contains three mangas. The first was a manga adaptation of the anime, with the second being a sequel called After War Gundam X: Under the Moonlight that introduces a new cast of characters. The third manga called After War Gundam X: Newtype Warrior Jamil Neate follows the adventure and missions of Jamil Neat, a principal character in the anime, before the end of the 7th Space War. The After War series shares some similarities with the Universal Century. It is also the first series outside of the Universal Century to use Newtypes.

Retrieved from "https://gundam.fandom.com/wiki/After_War?oldid=452283"
Community content is available under CC-BY-SA unless otherwise noted.