The Aegis-class cruiser is a naval battleship in the Cosmic Era timeline.

The Aegis-class cruiser serves as the backbone of Orb Union's naval forces and is used primarily for guarding Orb's territorial waters. Based on a trimaran construction in which the ship's hull is divided into three sections, it has hydrofoils that can decrease the drag from the water and increase speed, allowing the ship to reach speeds of more than 50 knots. Armed with several guns and large number of missile launchers, the Aegis-class also has three flight decks for deploying three Helis, and although the ship is not designed to support mobile suits, three mobile suits can be temporarily tethered to its flight decks for deployment in battle.

A large caliber gun mounted at the front of the Aegis-class cruiser, it has a high firing rate of 66 rounds per minute.[1] The gun can fire different types of shells, such as specialized fragmentation burst, explosively formed penetrator, or armor-piercing shells, at ranges of excess of 32km.[2]

The Aegis-class cruiser can fire a large number of anti-air missiles from launchers (said to range from 132 to 164 launchers) arranged in rows spread across the ship. It is known that three rows of launchers are located at the bow, behind the 250mm rapid fire gun, with the starboard, port, and aft having four rows of launchers each.[1]

Three 25mm anti-air gatling guns with short firing range, but very high accuracy serve as the ship's last line of defense against enemy missiles, aircrafts, etc.[1] One is positioned in front of the bridge, and the other two are located before the rear flight decks.

These cruisers were used during the First Alliance-PLANT War, alongside the older and smaller Kuraomikami-class destroyers. They were deployed in large numbers during the Earth Alliance attack on Orb, during which many of them fell victim to the Alliance's new Gundam mobile suits.

The Aegis-class cruiser remained in service in CE 73 during the Second Alliance-PLANT War. Many of these vessels were part of the large Orb fleet which fought alongside the Alliance fleet against the ZAFT battleship Minerva in the Battle of Dardanelles and Battle of Crete. When ZAFT later attacked Orb, these ships were again deployed to defend the country as they did in the previous war. 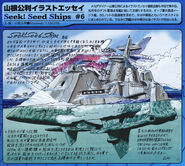