Advance of Zeta: Blue Wings of the AEUG

Advance of Zeta: Blue Wings of the AEUG

Van transfers to the AEUG and launches into space seeking traces of Danica, now a prisoner of the Titans. On an AEUG dock ship in a long elliptical orbit, Van accepts the prototype mobile suit “Gundam Kestrel”. In order to facilitate a prisoner exchange, Van and Ernest enter port at the neutral colony of Morgarten. At this peaceful colony removed from the war, the two are reunited again after many years, however…

With Keuranos defeated and Danica being captured by the Titans, Ernest decides to head for space. Traveling to the La Vie en Rose-class hangar Rosa Gigantea, Van is chosen by Anaheim to be the test pilot for their prototype Gundam, the Gundam [Kestrel]. With this strength, Van launches in pursuit of Ernest.

Having seized the Salamis Kai-class ship "Delphi", Van and the others set sail for an AEUG asteroid base in hopes of recruiting a crew.The Delphi is drawn into the war between the AEUG and the Titans. Van is on patrol when his Gundam is attacked by a Titans Marasai. Piloting the Marasai is none other than Commander Birder.

Van, aboard the Delphi, participates in a prisoner exchange at the neutral colony Morgarten. After the ceasefire, he enters battle with Ernest and the Eltria in the surrounding space. Opino and Avie, in their first encounter with Cyber-Newtypes and the Gabthley, are shot down, an ominous sign of how the odds are stacked.

The Delphi embarks on course for a rendezvous with the Radish. On its way, it is attacked by the Titans. An AEUG squadron sorties to do battle. However, Lucian's suit is struck by a beam from a Gabthley and destroyed. The pilot of the Gabthley is none other than Rossweisse, retuned as a Cyber-Newtype.

Chapter 17: The Battle for Konpeitoh

Chapter 20: The Beginning of the End

Chapter 21: Wall of the Heart

As the Titans' power ebbs, Commander Nishizawa's Tel Aviv detachment plans a nuclear assault on the surface using the Hati mobile armor. With the operation beginning, Van and Danica locate Ernest and Rossweisse and begin their attack on the squadron with the full armor Kestrel and Nemo D to stop them!

Chapter 24: Nothing's Gonna Change My Love For You 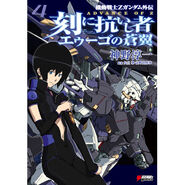