The Adrastea-class is a class of battleship that appears in Mobile Suit Victory Gundam anime series.

A bike-type battleship that is intended to be used on Earth but is able to function in space as well. The lower portion of the ship has mobile suit decks on either side for launch. Although it is heavily armed, the Adrastea carries less supply when compared to ships of similar size. It also has only a single gun capable of shooting underneath it in flight mode. Its wheels are similar to the Einerad, and are impervious to beam weaponry. The wheels can split horizontally to grant it flight capabilities either in space or in atmosphere, and the bridge tower can retract into the hull for combat operations.

The main weapons of the Adrastea-class are eight 2-barrel main cannons, with two situated forward and aft of the bridge tower. The remaining four twin guns are mounted on the sides of the wheels.

The Adrastea-class is equipped with a 3-barrel main gun mounted in front of the bridge tower.

The Adrastea-class is equipped with a ventral two-barrel secondary gun on the bow.

The Adrastea-class has 36 single barreled secondary guns mounted all over the hull. 17 are mounted on the port and starboard sides each, while the remaining two are mounted aft of the bridge tower.

Meaning "inescapable" in Greek, the Adrastea-class land battleship was a design of battleship used by the Zanscare Empire. Its concept was to strike fear into the hearts of its advesrsaries by sheer intimidation factor. The Adrastea-class, along with the Lysithea-class, make up the warship forces of the Motorad Squadron. However this class of battleship has also belonged to Cronicle Asher, one of the prominent figures in Zanscare Empire. 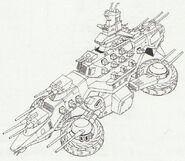