A Graze given by Ville Klaassen to Rosario Leone. Then, Rosario customized it for Nanao Narorina so she could escort the ASW-G-47 Gundam Vual. Colored white with original head, shoulder, leg, foot and backpack parts. Uses standard Graze armament in addition to an Anti-MS Claw.

The same shooting armament as used by the standard Graze. High accuracy, high utility value as the main or support weapon.

A sword-type melee weapon that is developed for ground combat, it is easy to wield due to its lightweight.[1] As the Graze’s attitude/posture control system is already under high stress when the suit is deployed under gravity, the battle blade is designed to display sufficient destructive power while placing as little burden as possible on the system.[1] It is stored on left shoulder when not in use.

Equipped on the left forearm, it features three blades that can pierce a mobile suit's armor.

The Adler first makes its appearance when Nanao Narorina pilots it to escort Rosario Leone in his Gundam Vual to prevent Liarina Morugaton from reaching the Tanto Tempo meeting. After Rosario's defeat and surrender to Argi Mirage's Gundam Astaroth, Nanao uses the Adler to assassinate Rosario to prevent his defection. 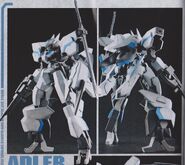 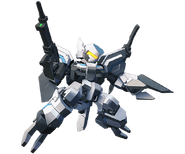 Retrieved from "https://gundam.fandom.com/wiki/Adler?oldid=502893"
Community content is available under CC-BY-SA unless otherwise noted.