A Baoa Qu (ア・バオア・クー, A Baoa Qu?) is a space fortress featured in in Mobile Suit Gundam. It was the Principality of Zeon's last line of defence during the One Year War.

A Baoa Qu was the Principality of Zeon's largest and most powerful asteroid base. Much like Luna Two and Solomon, it was originally transported from the asteroid belt for mining and resource extraction, but it was captured and transformed into a military base by Zeon forces, with the space fortification work completed within six months time.[1] A Baoa Qu was a fusion of two asteroids into one, shaped like a disc and a weight, forming an umbrella-like shape; its size is about 33.75km tall and 22.5km in diameter.[2][3] At the top-centre of the asteroid stands a lone enormous tower (though small in relative scale to the space rock it is built on), presumably where Zeon's elite would reside and observe over the battlefield. A Baoa Qu was built in the opposite L2 point orbit, placing it directly opposite from the Zeon homeland in Side 3. The asteroid provided rear defence, while the Solomon space fortress served as a frontline base.

The space fortress served as the Zeon Military Force's general headquarters for their space fleet. It also was used as a mobile weapons production factory. It was the scene of the titanic Battle of A Baoa Qu, one of the greatest battles of the One Year War. Unlike the earlier battle of Solomon, it was a hard-fought victory for the Federation.

After the One Year War, A Baoa Qu was kept by the Republic of Zeon following the signing of the Treaty of Granada. Later, in June U.C. 0087, the Republic of Zeon would hand it over to the Earth Federation's Titans special force, who would rename it Gate of Zedan (ゼダンの門, Zedan no Mon?).[4] The space fortress was completely destroyed in U.C. 0088 when the mobile asteroid base Axis rammed and broke the Gate of Zedan into two.

Main article: Battle of A Baoa Qu Following the firing of the Solar Ray, Rear Admiral Kycilia Zabi learned of her father's secret peace meeting with the Federation's General Revil at the Geldolva line at the time of the weapon's discharge. Only she and her brother, Supreme Commander Gihren Zabi, knew of their father's negotiations, making his death all the more suspicious. Even with the Federation fleet bearing down, she bided her time and prepared to move against Gihren.

Despite a third of the Federation's fleet being wiped out by the Solar Ray, the disarrayed Federation forces quickly regrouped, using the Pegasus-class assault carrier White Base as their rally point. At the same time, Gihren Zabi meet with A Baoa Qu's defenders and gave a thunderous speech, extolling the virtues of Zeon as a superior race and their destiny to "rise up to the future". In addition, his sister Kycilia was on her way from the lunar base Granada with her direct fleet and elite MS group, the Chimera Corps.

The defencive vicinity controlled around A Baoa Ku was divided into four main fields, all peppered with a great number of ships, mobile suits, and fighter craft:

On 31 December U.C. 0079, the Federation's attack began with the targeting of A Baoa Qu's N defense field with the second and third mobile suit battalions, while its remaining fleet used the Magellan-class battleship Luzar as its flagship to penetrate the S field. The White Base and its flotilla spearheaded an assault into the F line, A Baoa Qu's crossfire aiming point and also its weakest defense point. A smaller fleet, rumoured to have also been led by the Pegasus-class assault carrier, attempted to breach the V line, guarded by Zeon's Dolowa carrier. Gihren Zabi launched his counterattack using the mammoth Dolos-class heavy carrier and the MS-14A Gelgoog, Zeon's latest mass-production mobile suit which rivaled the famous Gundam in mobility and weaponry. The Federation attempted to use beam-dispersion smoke as in the battle of Solomon, but Gihren Zabi ordered a missile strike in response, while keeping his mobile suit forces held in reserve.

Kycilia's Mobile Assault Force arrived as the Federation began to penetrate A Baoa Qu's lines. While Kycilia Zabi ordered her fleet to position itself along the N field, she provided Char Aznable with the MSN-02 Zeong, a new mobile suit using Psycommu technology, which would allow him to pilot the unit using his Newtype abilities. After Char sortied in the Zeong, Kycilia confronted Gihren with the news of their father's death, and after hearing his confession, executed her brother for the crime of patricide. The two Zeon Dolos-class carriers were destroyed soon after, weakening the defensive capabilities of A Baoa Qu, while the defenders' remaining mobile suits were piloted mostly by conscripted students with just enough training to move their machines. Many of Zeon's remaining ace pilots, such as Thomas Krutz and Johnny Ridden, were also killed or declared missing in action, crippling the defenders' attempt to hold A Baoa Qu. Also, angered by the execution of the Supreme Commander, the Delaz Fleet, a battle unit fanatically loyal to Gihren Zabi and led by Aiguille Delaz, resigned from the battle, further reducing the number of ships and mobile suits in the Zeon lines.

A Baoa Qu's N field was eventually overwhelmed by the Federation's mobile suit battalions and the Zeon's S field was on the verge of collapsing thanks to White Base's Gundam. In response, the Zeong is sent to reinforce it and keep the Federation from penetrating the S field. The fighting became so thick that Amuro's Gundam and Char's Zeong were soon engaged in close combat inside the fortress, and continued even after both pilots destroyed each others' mobile suits. It was at this time the White Base took catastrophic damage and was forced to beach itself on the fortress, fighting Zeon infantry in close quarters combat.

Federation forces sent only token troops to assault E Field which was defended by Colonel Kuspen's combat battalion, under engineering Lieutenant Oliver May. The diverse force consisted of Oggos piloted by new recruits which only had a few days of training, the Big-Rang mobile armour piloted by Oliver, Zakus, and Gelgoogs. They managed to force the first wave of Federation forces to retreat, but suffered heavy casualties themselves.

As the battle for A Baoa Qu entered inside the heart of the fortress itself, Kycilia Zabi began preparations to flee. Her plan was to escape to a rallying point and meet up with fleets from Zeon's Granada lunar base and continue the war. She ordered Twanning, the base commander, to wait fifteen minutes after her exit then surrender the base. However, her plan is interrupted by Char Aznable, who assassinated Kycilia before she can leave the asteroid fortress, at last avenging the deaths of his parents. Her Zanzibar-class mobile cruiser is soon destroyed by Federation forces.

The remaining Zeon forces in S Field retreated to Side 3 from A Baoa Qu through E Field when the ceasefire order was given out by A Baoa Qu's Defense Command, which stated their collapse was inevitable and all nearby forces must accept the ceasefire. Captain Prochnow of the Jotunheim suggested that defending E field for 30 minutes could allow the remaining fleet to escape from A Baoa Qu. Under Colonel Kuspen, Captain Monique Cadillac, and Lieutenant Oliver May's lead, the defenders managed to hold off the Federation long enough for the fleet in S Field to successfully escape.[5]

A Baoa Qu finally fell to the Federation, on 1 January U.C. 0080. Zeon's Prime Minister Darcia Bakharov signed the Treaty of Granada, formally ending the One Year War. Under the conditions of the treaty, A Baoa Qu would be the only asteroid base kept by the new Republic of Zeon.

On 18th January U.C. 0088, Axis Zeon, led by Haman Karn, rammed the Gate of Zedan with their own mobile asteroid base Axis, as a part of the negotiations dealt with the AEUG. The event caused the Gate of Zedan to split and shatter, utterly destroying the asteroid. The Titans were shocked by such sudden betrayal, not to mention how much the Titans lost, including the murder of their leaders, Jamitov Hymen and Bask Om. Afterwards, the colony laser on Gryps was seized by Axis, and seized again in turn on 6th February, by the AEUG [6]. 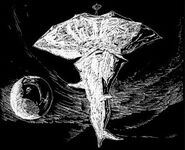 In its full glory, as Gihren declares the Federation to be nothing but scum

Overhead rear view, the observation tower can be seen clearly

Axis and Gate of Zedan, moments before impact

The Gate of Zedan destroyed 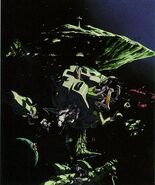 Crashing into Messiah, from the opening of Extreme VS Full Boost