The ATMS-09R Zuom is a mobile suit that appears in Mobile Suit Gundam U.C. 0096: Last Sun.

The ATMS-09R Zuom are a pair of custom-made MS created by former Principality of Zeon army stragglers hiding and living aboard the Musai-class Melmel. While it is based on the MS-09R Rick Dom, the exterior as well as the interior have been remodeled with processed junk parts collected over many years. In addition, there is considerable variation in the appearance and performance of the two units. Notable, unit 1 has much higher output and can use MS-14A Gelgoog's beam weapons. 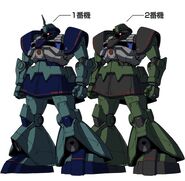