The ASW-G-XX Gundam Vidar is a mobile suit from the second season of the Mobile Suit Gundam IRON-BLOODED ORPHANS television series. It is piloted by Gaelio Bauduin, who had adopted the alias 'Vidar'.

Another special feature is that a third Ahab Reactor is equipped on the Gundam Vidar's back, in addition to the two in the Gundam Frame which already produce more than sufficient energy to power the mobile suit.[1] The true purpose of this third reactor is to grant the suit a new Ahab wave frequency, hence concealing its true identity.[3][5] Scanners simply report the Gundam Vidar as 'Gjallarhorn Unit No.21'.[6] The added weight of the third reactor does not affect the suit's mobility thanks to the excess output from the two Ahab reactors.[7] To further conceal the suit's identity, its armaments discard those that would give the image of Kimaris, and center around light and fast weaponry.[7]

Gundam Vidar's main armament, this slim saber is used in combat styles like striking and thrusting.[3] Its blade can be disconnected from the hilt to serve as a Napalm based explosive, or if it becomes entangled.[1][6][8] Replacement blades are stored in the side armor, three blades per armor.[1] When attaching a new blade to the saber, the side armor will slide back to expose the blade. The burst saber is stored on the side armor when not in use.[1]

A highly versatile rifle that can be used in any range, it is stored on the side of the side armor when not in use.[1] Manufactured by Gjallarhorn's development department, it is in test operation when adopted by Gundam Vidar.[1]

A compact, easy to use, close range shooting weapon stored in the front skirt armor.[8] It is primarily used to contain the movements of enemy mobile suit in close combat.[1]Both handguns can be used simultaneously for concentrated fire.[1]

A close combat weapon consisting of two extendable blades per foot, one in the tip and another in the heel.[1] Classified as blunt weapon, they are incapable of slicing.[8] They show their true value when used in combination with leg-based attacks such as kicking and stomping, turning the entire leg into a weapon.[1][8][7]

A pseudo version of the Alaya-Vijnana System based on Ein Dalton's remaining brain, with his Alaya-Vijnana installed as a support system.[4] Vidar uses this system when faced with foe he could not take on alone.[4] When activated, cables connect to the Alaya-Vijnana Type E implant on the back of Vidar's neck and links him to the counterpart in the mobile suit's system, which then takes over his body and controls the mobile suit in his stead.[4] It is as effective as the true Alaya-Vijnana system, with Vidar still in charge of selecting the target.[4] As the Alaya-Vijnana system was originally designed for surpassing human limitations to fight against the mobile armor, it exceeds the limits of the human body and causes great strain on the brain.[4] However, thanks to Ein's brain in the Alaya-Vijnana Type E, Vidar can pilot the Gundam Vidar to its full potential without endangering his own body.[4] The system is most effective in 1 on 1 battle, but has some difficulties with a battlefield melee.[7] The implant in Vidar also assisted him in walking.[7]

The Gundam Vidar is first deployed in 325 P.D after a lengthy period of repair and maintenance. It first sees action against rebels in the space colonies who were seeking independence from the Oceanian Federation. It is later deployed alongside Julieta Juris' EB-08 Reginlaze to Mars to investigate the mobile armor Hashmal, as well as what happened to Iok Kujan's team as they lost contact with the Arianrhod fleet. On Mars, the Gundam Vidar briefly confronted McGillis Fareed and Isurugi Camice before leaving to meet with Iok and Julieta.

The Gundam Vidar would last see action during McGillis' coup d'etat of Gjallarhorn. After understanding McGillis' reasons behind reforming Gjallarhorn, Vidar challenged him to a duel, but was interrupted by Mikazuki Augus in the ASW-G-08 Gundam Barbatos Lupus Rex. After a brief battle, Vidar retreated back to the Arianrhod fleet's flagship where it's camouflage armor along with it's 3rd Ahab Reactor are removed and would be upgraded into the ASW-G-66 Gundam Kimaris Vidar. 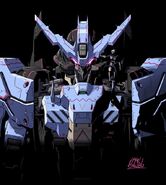 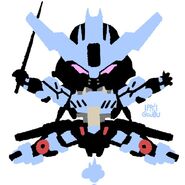 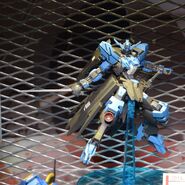 Retrieved from "https://gundam.fandom.com/wiki/ASW-G-XX_Gundam_Vidar?oldid=443988"
Community content is available under CC-BY-SA unless otherwise noted.