The ASW-G-66 Gundam Kimaris Vidar is a mobile suit from the second season of the Mobile Suit Gundam IRON-BLOODED ORPHANS television series. It is piloted by Gaelio Bauduin.

After Vidar removed his mask and revealed himself to be Gaelio Bauduin, the Gundam Vidar was retrofitted into the Gundam Kimaris Vidar, reclaiming the name Kimaris.[1] This conversion was conducted quickly as it was planned from the beginning.[2] The Gundam Vidar's Alaya-Vijnana Type E was retained, but the third Ahab Reactor was purged as it only served to hide the suit's true identity, which is no longer needed.[1] The Gundam Kimaris Vidar is meant for the decisive battle against McGillis Fareed and his Gundam Bael.[1] This variation of the Kimaris has existed since the Calamity War era.[3]

A large lance designed for Kimaris Vidar's use, it is the suit's symbolic weapon.[1] The lance's tip section is capable of spinning, enhancing the suit's thruster powered charges.[1] The drill lance is also equipped with two 200mm cannons and two built-in Dainsleif launchers.[1][5] The Dainsleifs are loaded with 8.5m long Special KEP Bullets, which are stored in the suit's shield.[3] A thruster is mounted behind each 200mm cannon and can be used to further enhance the power of the suit's lance thrust.[3]

Made of the rare alloy used in mobile suit's frame, its blade is sharpened for cutting attacks as well as penetrating thrusts.[1] It is used when the suit is caught in close combat situations where hit-and-run attacks are not possible.[3] Mounted behind the left side armor when not in use.[1]

A rotary pile punker made of the same material as the mobile suit's frame is built into each knee.[1][3] It is used for attacking an approaching enemy machine that evaded the Kimaris Vidar's lance thrust, or other close combat situations where the suit's hit-and-run attacks are not possible.[1][3] The two ports on the sides of the knee are for venting the gas when the Drill Knee is in use.[3]

Defensive armament attached to the two sub-arms on the back.[3] With their flexible range of motion, the pair of shields guard the suit from enemies’ attack.[3] The shields have built-in thrusters, and they are positioned at the suit's back to concentrate their thruster output during high-speed movements.[3] Each shield also stores 4 Special KEP Bullets for the Drill Lance's Dainsleif launchers, as well as the launchers' power unit.[1][3] When using the Dainsleif, one of the shields would extend and attach to the Drill Lance, loading the latter with the bullet. The bullet is launched using the power from the shield-mounted power unit. The slits in the extended portion of the shield contains the electrical discharge unit of the power unit and will light up during the firing of the bullet.[3]

A pseudo version of the Alaya-Vijnana System based on Ein Dalton's remaining brain, with his Alaya-Vijnana installed as a support system. When activated, cables connect to the Alaya-Vijnana Type E implant on the back of Gaelio's neck and links him to the counterpart in the mobile suit's system, which then takes over his body and controls the mobile suit in his stead. It is as effective as the true Alaya-Vijnana system, with Gaelio still in charge of selecting the target. As the Alaya-Vijnana system was originally designed for surpassing human limitations to fight against the mobile armor, it exceeds the limits of the human body and causes great strain on the brain. However, thanks to Ein's brain in the Alaya-Vijnana Type E, Gaelio can pilot the Gundam Kimaris Vidar to its full potential without endangering his own body. The system is most effective in one-on-one battle, but has some difficulties with a battlefield melee. The implant in Gaelio also assisted him in walking. 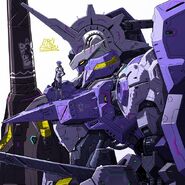 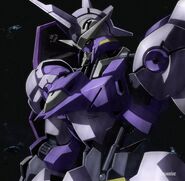 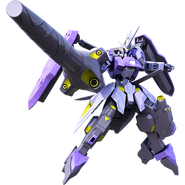 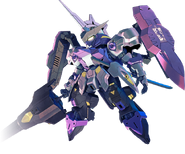 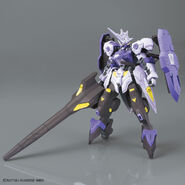