The Gundam Kimaris Trooper's main feature is that it can transform into a four-legged, hovering form known as the 'Trooper Form', and is one of the few Gundam Frame machines with transformation mechanism.[2][3] The Trooper Form has excellent frontal assault abilities and emphasizes on charging ahead than turning capability.[2] A hover unit is installed in the rear skirt armor along with a movable stabilizer, and the hovering is maintained by the same posture/attitude control capabilities used during high mobility maneuvering in zero gravity environment.[2][4] The hovering helps to minimize the effects of gravity, and grants the suit high mobility.[2] Thus, the suit's hit and run attacks with its lance is as effective on the ground as in space.[1][2] In terms of defensive capabilities, the Trooper Form has no problem parrying or blocking enemy's attacks, allowing it to maintain its hovering state for an extended period.[2]

The main weapon of the Kimaris Trooper, it is larger than the Kimaris' Gungnir and can be used for close as well as ranged combat as it has two 140mm machine guns.[2][5] It also has two thrusters for posture/attitude control during attacks.[2][5] The Destroyer Lance's greatest appeal lies in its ability to make full use of the suit's mobility for frontal assaults.[2]

A defensive equipment, it is usually held by the hands of the main arms but can also be mounted on the forearms or on the Sub-Arms.[2] A Kimaris Saber is stored on the shield's underside.[2]

Stored on the underside of the Kimaris Shield, it has a rectangular blade and is used for extreme range close combat.[5] It can be used by the suit's main arms when the Destroyer Lance is held by the Sub-Arms.[2]

An unknown number of mines are stored in the Kimaris Trooper's rear skirt armor and are released from the six slits on the armor's outer edge.[4] They can be filled with explosive charges, smoke or napalm. The mines are used for base suppression, or for disrupting the enemies during anti-mobile worker/anti-mobile suit battle.[2]

A foldable sub-arm is mounted in each of the suit's side skirt armor.[2] When unfolded, they can be used to hold or support the Destroyer Lance or the Kimaris Shield.[2]

Mounted in the chest, the pair of Multi-slot Accelerators are revealed when the hatches on both sides of the chest armor open.[3] The function and purpose of this equipment is currently unknown, but it seems related to an energy circuitry in the chest that is unique to Kimaris Trooper's Gundam Frame, as well as Ahab Reactor linked compression circuitry and cooling mechanism in the suit's armor. [3]

Following Tekkadan's arrival on Earth, Gaelio equipped the ASW-G-66 Gundam Kimaris with an alternate set of armor for ground combat and it became the Gundam Kimaris Trooper. It debuted during a rescue operation in Alaska to save Carta Issue and her EB-06rs Graze Ritter Commander Type after the latter was heavily damaged by Mikazuki Augus and his ASW-G-08 Gundam Barbatos. Gaelio however was too late, and Carta died on their way home.

At the outskirts of Edmonton, the Kimaris Trooper fought Mikazuki and the Barbatos again. After fighting for a while, Mikazuki left to protect Kudelia Aina Bernstein, Atra Mixta and Orga Itsuka from the EB-AX2 Graze Ein. Gaelio was then left to face a new enemy, the V08-1228 Grimgerde. Gaelio was shocked to find that the Grimgerde was piloted by his friend McGillis Fareed. Gaelio then attacked McGillis when he learnt that McGillis not only sided with Tekkadan, but had also manipulated him, Ein and Carta to further his own agenda. Despite the Kimaris Trooper's fierce attacks, none of them managed to damage the Grimgerde. The battle concluded when the Kimaris Trooper was disabled by Grimgerde via a stab in the chest. According to official records, the damaged Kimaris Trooper was recovered after the battle and returned to the Bauduin Family. In actuality, the Kimaris Trooper was brought to the Outer Lunar Orbit Joint Fleet (aka Arianrhod Fleet) and under the orders of Rustal Elion, it was overhauled into the ASW-G-XX Gundam Vidar. 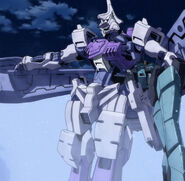 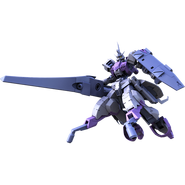 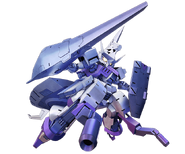 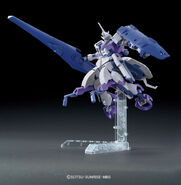