The ASW-G-64 Gundam Flauros (Ryusei-Go) is a mobile suit from the second season of the Mobile Suit Gundam IRON-BLOODED ORPHANS television series. It is piloted by Norba Shino.

The Gundam Flauros' strength lies in the back-mounted long-range shelling unit and to maximize its power, a transformation mechanism is incorporated into the suit's frame.[1] This allows the Flauros to change into a quadruped form known as 'Shelling Mode', which excels in ultra long range shooting and is primarily for ground combat.[1][2][3] The mode's quadruped form improves the accuracy of the suit's railguns and helps absorb the recoils due to its low posture and because the suit is fixed to the ground surface.[1][3] It also supports immediate evasion during shooting.[1] The suit's cockpit rotates to accommodate the different modes, and as a result, it has two different hatches.[2] One at the top of the chest for use in Shelling Mode, and another at the front of the chest for MS mode.[2]

As Tekkadan failed to reactivate Flauros after discovering it in a Half Metal Mine, they sent it to Saisei.[1] The Saisei's mechanics found that its two Ahab Reactors were in a sleep state, and successfully reactivated and overhauled the suit.[1] Unlike Barbatos and Gusion Rebake, the Flauros' overhaul did not involve feedback based on pilot's data but was focused on restoring its original functions.[3] As an example, the damaged railguns were replaced with newly built units based on the data Teiwaz had.[3] Other modifications include changing the suit's nanolaminate armor color to match its pilot's preference based on orders from Tekkadan and a cockpit from Teiwaz's MS series, but with an Alaya-Vijnana System compatible seat, was installed in place of the suit's missing cockpit.[1][2] The restored Gundam Flauros was dubbed by its pilot, Norba Shino, as the 'Ryusei-Go IV'.[1][4]

A pair of back-mounted electromagnetic launchers for super long range shooting, they pivot over the shoulders to fire in mobile suit mode.[1][4] In Shelling Mode, the output of the two Ahab Reactors are concentrated on the railguns, allowing them to fire bullets at explosive speed.[1] They can shoot special bullets made from the rare alloy used on mobile suit frames due to the use of superior mechanisms, and during the Calamity War, they were heavily used as weapons that could even pierce nanolaminate armor.[1] Such railguns are known as 'Dainsleif', and their use was banned after the war as Gjallarhorn considered them to be an inhumane weapon.[1] However, Tekkadan uses conventional warheads, so it is in the gray area in terms of the ban.[5] Shino dubbed the weapon as 'Galaxy Cannon'.[4] When the railgun is loaded with the Dainsleif bullet, which in Gundam Flauro's case is shaped like a lance and front-loaded, Shino dubbed it as the 'Super Galaxy Cannon'.[6]

A pair of short-barreled cannons can be mounted on the back instead of the railguns, and are capable of displaying their capabilities without the suit transforming into Shelling Mode.[7] Although their firepower is weaker than the railguns, they can be used for shelling while moving and is effective in melees.[7][8]

A pair of 120mm machine guns exclusive to the Flauros, they are mounted on the backpack and can be fired directly from under the arms.[1] They can also be handheld when needed.[1]

Gundam Flauros' handheld bladed weapon, it is suitable for use in extremely close range combat due to its short size, and can also be used for emergency self-defense.[2][9] Its design focused more on speed than power.[2] Can be dual wielded, and stored on the mobile suit when not in use.[2]

Mounted on the forearms, the pair of shields have claws on their tips which are used to anchor the suit to the ground during Shelling Mode.[2]

An organic device system, this old man-machine interface was developed during the Calamity War to maximize the abilities of the mobile suit. Hence, most mobile suits from that era, like the Gundams, are compatible with it. The system has two parts, one part is installed in the mobile suit, and the other part is implanted into the pilot’s spine. With this system, the pilot can connect to the mobile suit's computer and directly process mobile suit data. It also allows the pilot (even uneducated ones) to operate a mobile suit for combat without reading the instruction manual. The implant in the pilot also enhances spatial awareness. The drop in technical capabilities after the Calamity War, coupled with the use of an incomplete version of the system in the Outer Sphere areas (such as Mars and Jupiter), lead to the implant surgery having a low success rate and can only be done at a young age to let the implant fuse as the pilot grow. As the Gundam Flauros' cockpit was missing when it was discovered, it was fitted with a cockpit from Teiwaz’s MS series but with an Alaya-Vijnana System compatible seat to allow the system to function again.

The Gundam Flauros is the 64th of the 72 Gundam Frames created by Gjallarhorn near the end of the Calamity War to counter the threat of the powerful mobile armors such as Hashmal. With a white-and-blue color scheme, it was eventually sent to Mars to fight the mobile armors there. It was later abandoned in a Half-metal mine alongside Hashmal, where they would remain, hidden and dormant, for over three centuries.

In P.D 325, the Gundam Flauros was excavated alongside Hashmal by Tekkadan. While the true nature of the much larger mobile armor initially remained unknown, Tekkadan immediately recognized Flauros as a Gundam Frame. It was salvaged and sent to Saisei to be repaired and overhauled, with its original colors replaced by the distinctive magenta color favored by Norba Shino. Once repairs were complete, Flauros was sent back to Mars to assist Tekkadan against the awakened Hashmal. Using its railguns, the Flauros was able to separate the Hashmal from its Pluma support units.

When the Turbines was framed for the illegal possession of the Dainsleif-type railguns and came under Gjallarhorn's assault, the Gundam Flauros was deployed alongside STH-16/tc Shiden Custom (Riden-Go) and ASW-G-11 Gundam Gusion Rebake Full City to assist in the escape of non-combatants. This was the first time the Gundam Flauros fought with the short-barrelled cannons and the assault knife. Following that, the Gundam Flauros was deployed in Tekkadan's vengeful assault against the JPT Trust, where it destroyed numerous enemy machines, as well as shelling the enemy carrier from a distance using the short-barrelled cannons and causing significant damage.

In the battle between Gjallarhorn's Coup d'etat group led by McGillis Fareed and the Arianrhod Fleet led by Rustal Elion, the Gundam Flauros lost its left arm and left short-barrelled cannon after being caught in a Dainsleif bombardment. However, Shino insisted on taking on the Arianrhod Fleet's flagship using the Super Galaxy Cannon, but the shot with the Dainsleif projectile missed the bridge due to interference from the EB-08jjc Reginlaze Julia. Despite this, Shino refused to give up and charged towards the fleet. The fleet opened fire, and when the attacked ended, only Gundam Flauros' damaged torso was left and Shino was killed in action.

Excavated from a Half-metal mine on Mars

Side view of face

Attacked by the Dainsleifs (Ep 42) 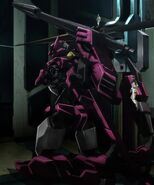 Face close up with person in front (Ep 42) 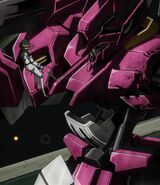 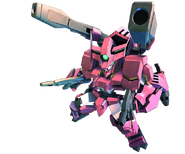 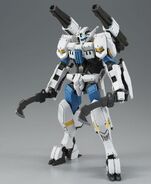 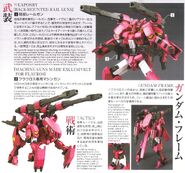 Retrieved from "https://gundam.fandom.com/wiki/ASW-G-64_Gundam_Flauros_(Ryusei-Go)?oldid=456586"
Community content is available under CC-BY-SA unless otherwise noted.