A Gundam Frame owned by the Nadira family.[1][2] The Gundam Gremory's head is similar to the other Gundam Frames, with twin eyes and antennae, but is rarely seen as it is often covered by a removable hood.[2] The suit's upper body (including the hood) is covered with Nanolaminate Coat, which is stronger than Nanolaminate Armor, giving the Gundam Gremory the highest defensive power among all mobile suits.[2][3] It is armed with an anchor-shaped weapon named the Battle Anchor.[2][3] As one side of the Battle Anchor was damaged during the Calamity War, it now resembles the scythe of the Grim Reaper, and together with the Gundam Gremory's hooded appearance, the suit evokes the image of the Grim Reaper.[2][3]

A pair of shell-firing ranged weaponry, one is mounted on each of Gundam Gremory's forearms.

A custom anchor-shaped weapon used by the Gundam Gremory, one of the blades was destroyed during the Calamity War and never repaired.[2][3] With the absolute defense of the Nanolaminate Coat, the Gundam Gremory would close in on the enemy and attack with the Battle Anchor.[2]

Deira Nadira would pilot the Gundam Gremory, and would fight Argi Mirage in the ASW-G-29 Gundam Astaroth Rinascimento. The fight ended when Mina Zalmfort revealed herself to Deira. 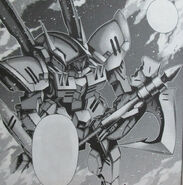 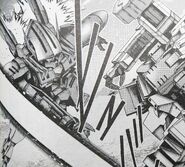 Face hidden by hood
Add a photo to this gallery 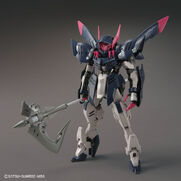 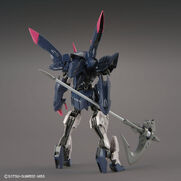 Retrieved from "https://gundam.fandom.com/wiki/ASW-G-56_Gundam_Gremory?oldid=504915"
Community content is available under CC-BY-SA unless otherwise noted.