The Gundam Vual Yuhana was prepared by Gianmarco Salerno to support Argi Mirage.[1] The Gundam Vual was stripped of its armor and equipment after its defeat, and was tailored to Sampo’s order when he was selected to be its pilot.[1] The suit's name came about as Sampo's sister, Yuhana, had registered it without permission.[1] Its output was improved and it was equipped with a sword and a chopper that can be combined into a halberd, a pair of foldable chainsaws, and a 210mm anti-material rifle for long range support.[1]

A chainsaw is mounted under each forearm, and flips forward when deployed.

Stored on the right side of the back, this handheld weapon is modified to be able to combine with the chopper to form a halberd. Can also be used on its own.

Stored on the rear skirt armor, this hatchet-like weapon can be used on its own, or combine with the sword to form a halberd.

Identical to the one used by the Gundam Vual, but it is now mounted on the back instead of the waist.

Mounted on the right shoulder, its spikes and claw-like tips allow it to be used as a close range weapon. Identical to the one used by the Gundam Vual 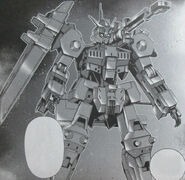 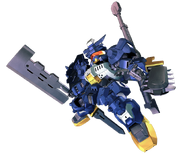