A Gundam Frame MS used by Rosario Leone, it had no armor when he found it.[1][2] The Gundam Vual took on its current form when the Gjallarhorn official, Ville Klaassen, intervened in the current Tanto Tempo affair and provided Rosario with some of Astaroth Origin's armor and equipment to purposely get on Volco's nerves.[1][2] The high-power backpack and leg boosters not only grant the Gundam Vual great mobility and maneuverability, but also vastly improve its solo flight range.[2] The suit's arms are lightly armored for greater mobility, but is equipped with two types of shield after its first battle to cover the insufficient armor.[1][2] Initially wielding a Glaive, it later switched to a more destructive Mining Hammer.[1]

A naginata type weapon with a blade on each end, it is taller than the Gundam Vual.[2][3] Continuous attacks using the blades alternately can pressure the enemy, preventing any counterattacks.[2][3] Main armament during the suit's first battle against the Gundam Astaroth.[4]

A relatively light but highly devastating weapon.[2] In addition to its destructive power as a pure blunt weapon, it can cause fatal damage to Nanolaminate Armor when the poll rotates.[1] This is an application of a mining technology in a weapon.[2]

Identical to the one used by the Gundam Astaroth.[5] Mounted on the waist for a stable firing position.[3]

Also known as the Spartan Shield, it protects the armorless left arm.[1][2] It is small and round so as not to obstruct the use of the Glaive or the Mining Hammer.[2] Equipped on the Gundam Vual after its first battle against the Astaroth.[1]

Mounted on the right shoulder, its spikes and claw-like tips allow it to be used as a close range weapon.[1][2] Equipped on the Gundam Vual at the same time as the Round Shield.[1]

The Gundam Vual is the 47th of the 72 Gundam Frames created by Gjallarhorn near the end of the Calamity War to counter the threat of the powerful mobile armors such as Hashmal. Over three hundred years later, it was found by Rosario Leone in the wreckage of a discarded space colony, near a power unit.[2] By then, the Gundam Vual was entirely armorless and Rosario recovered it secretly, becoming its owner.[2] 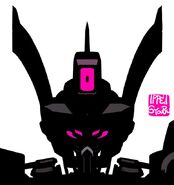 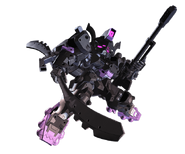 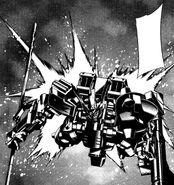 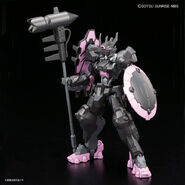 Retrieved from "https://gundam.fandom.com/wiki/ASW-G-47_Gundam_Vual?oldid=452121"
Community content is available under CC-BY-SA unless otherwise noted.