The ASW-G-35 Gundam Hajiroboshi is the main mobile suit of the Mobile Suit Gundam IRON-BLOODED ORPHANS Urdr-Hunt mobile game. It is piloted by Wistario Afam.

A Gundam Frame unit that has been lying dormant for a long period in the power station of the control section of the Radonitsa Colony floating above Venus.[1][2] It is unclear when and who brought the Gundam Hajiroboshi here, but it was discovered by Demunaa Kitako Jr.'s late grandfather and Demunaa has inherited the duty to maintain it.[1][2] There are evidence of large-scale modifications and most of its equipment other than the frame are made from modern technology.[1]

A well-balanced close combat weapon.[1] It is designed to minimize its effect on the mobile suit's movement when swung at full power.[1] This highly versatile weapon can be wielded by any mobile suit and is easy to handle even for inexperienced pilots.[1]

A relatively small shield with attack and defense capabilities.[1] It has a variable claw for capturing the enemy and a needle can be fired from inside the shield to penetrate the captured unit's armor.[1]

An easy to wield small rifle with a short barrel.[1] It is mainly for intimidation purposes and generally used with other armaments.[1]

For years, the Hajiroboshi has been secretly maintained by Demunaa Kitako Jr. at the bequest of his late grandfather. When the Radonitsa Colony is attacked by unknown mobile suits, Wistario Afam boards the Hajiroboshi and awakens it from its long slumber.

Hidden in the power station

Flying towards the Enzo 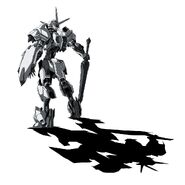 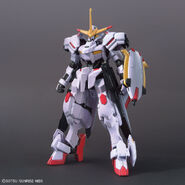 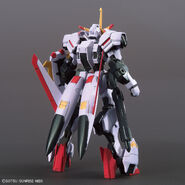 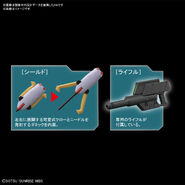 Retrieved from "https://gundam.fandom.com/wiki/ASW-G-35_Gundam_Hajiroboshi?oldid=461789"
Community content is available under CC-BY-SA unless otherwise noted.