After the ASW-G-29 Gundam Astaroth was restored to 82% of its original configuration, it was stolen and sold.[1][2] It was eventually recovered from an underground market in the Jupiter Sphere but had lost the majority of its armor and equipment.[1] To replace the missing parts, the suit was fitted with armor and equipment from other mobile suits, returning it to an asymmetrical shape, and was renamed 'Gundam Astaroth Rinascimento'.[1]

The design of Astaroth Rinascimento emphasized offensive and defensive power, and is equipped with an enlarged sub knuckle, a new shield arm, and a new weapon known as Bastard Chopper.[2][3] Volco Warren fitted the suit with weaponry all over its body as a way of providing equipment support to Argi Mirage, who has yet to mature as an MS pilot.[1] The aim is to secure the advantage in combat no matter the situation via the effective use of weaponry.[1] A larger backpack with improved thrust power is also mounted to offset the increase in weight, but with the removal of the boost armors, the suit has become so unbalanced that now Argi is the only one who can properly pilot it.[2]

The same pair of knives as used by the Gundam Astaroth, they are judged to be compatible with Argi's combat style based on past usages and were retained as standard armament.[1][2] Stored on a storage rack attached to the left side skirt armor when not in use.

The same rifle as used by the Gundam Astaroth.[2] Its shooting accuracy is improved, but unknown if Argi noticed it.[1] Stored on a storage rack attached to the right side skirt armor when not in use.

The main weapon of the Gundam Astaroth Rinascimento, it is also used by the Gundam Astaroth.[1][2] A large folding blade, it is taller than the suit itself when unfolded, and is stored on the suit's backpack in its folded form when not in use.[1] Due to its foldable nature, there are weak points in the strength aspects of the blade.[1]

A new weapon used by Gundam Astaroth Rinascimento, it is a large blade that can be used individually or be connected to the demolition knife and used as a single large sword.[1] This combined form also compensates for the demolition knife's weakness.[1] The chopper also incorporates an "Explosive Dainsleif", which is modeled after the "Dainsleif", but its projectile is propelled by gunpowder.[1][3] It is not as powerful as the real Dainsleif and is used in extremely close range to penetrate the Nanolaminate Armor.[3] When using the Explosive Dainsleif, the chopper has to be in the combined form for a stable firing position.[3] When not in use, the chopper is stored on the suit's backpack.

Mounted on the left forearm and covering the suit's left manipulator, it is an enlarged form of the equipment of the same name as used by the Gundam Astaroth.[2][3] It uses parts from a UGY-R45 Garm Rodi's leg armor and serves both as a shield and as a weapon for assaulting opponents.[1][2] Like the Gundam Astaroth's sub knuckle, it has a manipulator for supporting the usage of the Demolition Knife.[3] The Sub Knuckle bears the crest of House Warren, as was seen on the Gundam Astaroth Origin.

A large shield mounted on the right shoulder, it can unfold into an oversized third arm capable of wielding the suit's weaponry.[1][3] The shield arm's manipulator shares parts with the sub knuckle's manipulator.[3]

Like the Gundam Astaroth, Argi can use a neural connection through his prosthetic right arm to pilot the suit. This allows him to control the suit at a higher reaction speed than normal people.

The Gundam Astaroth was stolen and sold by Nanao Narorina soon after it was restored to 82% of its original configuration.[1][2] Volco Warren searched high and low for the missing Gundam but to no avail.[1] About six months later, Gianmarco Salerno found it at the underground market in Jupiter Sphere and bought it back for Volco.[1][2] As the suit has lost most of its armor and equipment, it was fitted with parts from other mobile suits to compensate and became the Gundam Astaroth Rinascimento.[1] Volco was unsatisfied with this, but Argi Mirage, who had never seen Gundam Astaroth's original configuration, felt a rather odd affinity with the silhouette of the Gundam Astaroth Rinascimento.[1] 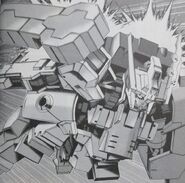 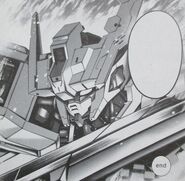 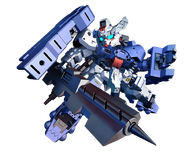 Retrieved from "https://gundam.fandom.com/wiki/ASW-G-29_Gundam_Astaroth_Rinascimento?oldid=506232"
Community content is available under CC-BY-SA unless otherwise noted.