The Gundam Astaroth Origin was one of the 72 "Gundam Frames" produced and used in the Calamity War, roughly 300 years ago. It is also one of 26 remaining Gundam Frames that have survived the Calamity War and reported to be operational. Discovered by Gjallarhorn's Warren Family after the war, it has the family's crest engraved on the shoulder armor and cockpit hatch upon formally recognized as belonging to the family. However, thanks to a scandal that caused the financial situation of the Warrens to go bad, they are forced to sell its armor and equipment, and thus its current form is quite different. The Astaroth Origin's armor and equipment would find its way to different machines.

The Astaroth Origin is a versatile machine that can be deployed on any battlefield, and is equipped with mid to close range weaponry. It is also lightly armored and has higher mobility than the Gundam Barbatos. The shoulder armor and booster tail can be deployed to enter Flight Form, which grants the suit longer travelling range as well as atmospheric flight and gliding capabilities.

Astaroth's main firearm that was configured with a somewhat short effective range.[1] Equipments that perform efficiently in middle distance are used by machines that specialize in rapid approach through high mobility.[1] Can be stored on the left side skirt's storage rack.

Blunt weapon that functions as the γ Nanolaminate Sword's scabbard.[1] It is a great armament in this state since it is very maneuverable.[1] It is possible to mount it on the left side skirt's storage rack.[1]

A sword type close combat armament that has a deep crimson blade matching the fuselage's color.[1] It's endowed with a function that induces a special nanolaminate structure, called γ Nanolaminate reaction, on the blade's surface by the transmission of compressed Ahab Particles from the connector cable.[1] Because the γ Nanolaminate reaction activated blade is effective in disrupting nanolaminate structures when touching the armor surfaces of MS and battleships, it is considered to be an extremely powerful armament in theory.[1] However, Ahab Particle compression technology lacks stability, so even with the technology from the Gundam Frame's development time there are only a few successful examples.[1] Currently, this is a completely lost technology.[1]

A unique feature of the Astaroth's Gundam Frame that allows compressed Ahab Particles to be transmitted through the right forearm connector cable to the γ Nanolaminate Sword.

By deploying the shoulder armor and booster tail, Astaroth can enter Flight Form, which is developed with the expectation that it would allow the Astaroth Origin to be used for wide area battle.[1] In this form, the Astaroth Origin has independent long distance cruising capability several times that of normal MS, and can fly at high altitude in the atmosphere as well as glide for an extended period.[1]

The Gundam Astaroth is the 29th of the 72 Gundam Frames created by Gjallarhorn near the end of the Calamity War to counter the threat of the powerful mobile armors such as Hashmal. Its location after the end of the Calamity War was initially unknown; it was later found at the bottom of a large crater by the Warren family, a family affiliated with Gjallarhorn, who were at that time tasked to investigate the site of a fierce battle on the moon's surface. After the Warren family is recognized as the rightful owner of the Astaroth, their family crest is engraved on the suit's shoulder armor and cockpit hatch as they restore the damaged MS.[1] The Astaroth was then passed down the generations in the family. However, several years ago, the Warrens were hit by a scandal involving illicit dealings with one of the economic blocs, and their financial situation worsened. Hence, they decided to sell the Astaroth's armor and equipment on the underground market. Its Gundam frame later fell into the hands of Daddy Ted on the Avalanche Colony, and the Gundam was eventually outfitted into the form of the ASW-G-29 Gundam Astaroth. Volco Warren, with the help of Argi Mirage as the pilot, later attempts to recover all the parts to restore the Astaroth to its original, complete form. 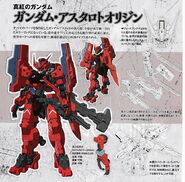 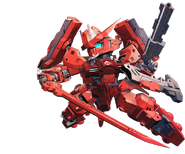 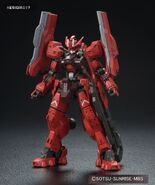 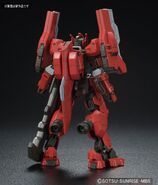 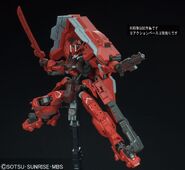 Retrieved from "https://gundam.fandom.com/wiki/ASW-G-29_Gundam_Astaroth_Origin?oldid=490734"
Community content is available under CC-BY-SA unless otherwise noted.