Gundam Astaroth is one of the 72 "Gundam" frames produced and used in the Calamity War, roughly 300 years ago.[1] It is also one of 26 remaining Gundam Frames that survived the Calamity War and reported to be operational. The Warren Family, a family affiliated with Gjallarhorn, owned the Gundam Astaroth, but was forced to sell its armor and equipment when their financial situation went bad, with the suit's Gundam Frame eventually acquired by Tanto Tempo's Daddy Ted.[1]

The Astaroth was then restored to operational condition by fitting its frame with a mix of parts from other mobile suits, and an example of this is that it's left forearm armor and left shoulder armor is from a UGY-R38 Spinner Rodi.[1][2] The two side waist armors are called Boost Armor, which have a wide range of movement and help in the attitude/posture control of the mobile suit since the Astaroth's asymmetry affected its center of gravity.[1]

A combat knife is stored in each of the Boost Armor on the sides of the waist.[1] It is used for extreme range close combat.[2]

A rifle that is prepared for Astaroth's use when it is owned by the Warren family.[1] It uses standard ammunition.[3]

Despite having the word 'knife' in its name, the weapon is actually a large folding blade. Stored on the back in its folded form when not in use, the unfolded Demolition Knife is taller than the Astaroth itself.[1] Due to its foldable nature, there are weak points in the strength aspects of the blade.[3]

Another weapon that the Astaroth used while owned by the Warren family, it comes with a bipod.[2] The length of the rifle exceeds the height of the Astaroth, and can be attached to the waist hardpoint when in use, although this requires one of the Booster Armor to be removed.[2]

A pair of Panzerfaust can be stored on the back of the Astaroth via a mount arm.[2]

Mounted on the left forearm, it uses a part of the Hyakuren's side skirt armor and has a three finger manipulator.[1] It was fitted onto the Astaroth by Volco Warren.[1]

Argi can use a neural connection through his prosthetic right arm to pilot the Gundam Astaroth.[2] This allows him to control the suit at a higher reaction speed than normal people.[2]

A special energy transmission mechanism is installed in Astaroth so that it can use a special custom equipment.[2] However, that equipment was lost when the Astaroth left the hands of the Warren family.[2] None of the Astaroth's current equipment can use this mechanism.[2]

The location of the Gundam Astaroth (in its original form) after the end of the Calamity War was initially unknown; it was later found at the bottom of a large crater by the Warren family, a family affiliated with Gjallarhorn, who were at that time tasked to investigate the site of a fierce battle on the moon's surface.[4] The Astaroth was then passed down the generations in the family. However, several years ago, the Warrens were hit by a scandal involving illicit dealings with one of the economic blocs, and their financial situation worsened. Hence, they decided to sell the Astaroth's armor and equipment on the underground market. The Astaroth (by now with only its Gundam Frame left) fell into the hands of Daddy Ted on the Avalanche Colony. Volco, a member of the Warren family, eventually visited Daddy Ted to purchase the Astaroth in order to restore it to its complete form. Later, Argi arrived to assassinate Daddy Ted, as part of a contract killing, but eventually protects a dying Daddy Ted and boards the Astaroth.

After a series of events, sufficient parts were collected and Gundam Astaroth was returned to 82% of its original form.[3] However, the suit was stolen by Nanao Narorina and sold.[3] Volco Warren searched high and low for the missing Gundam but to no avail.[3] About six months later, Gianmarco Salerno found it at the underground market in Jupiter Sphere and bought it back for Volco.[3][5] As the suit has lost most of its armor and equipment, it was fitted with parts from other mobile suits to compensate and became the ASW-G-29 Gundam Astaroth Rinascimento.[3] 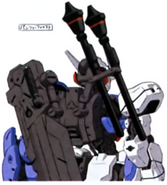 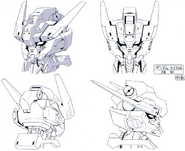 Boost Armor and the concealed Knife

Demolition Knife and its mount part 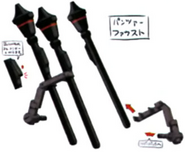 Panzerfauts and their mount part 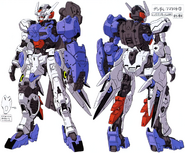 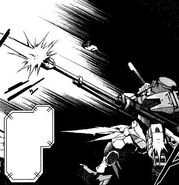 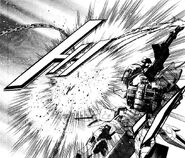 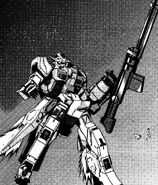 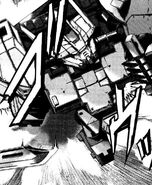 Retrieved from "https://gundam.fandom.com/wiki/ASW-G-29_Gundam_Astaroth?oldid=410108"
Community content is available under CC-BY-SA unless otherwise noted.