Crushing a Man Rodi with the Scissor-Variable Rear Armor

In Front of Isaribi

Falling Before A Graze 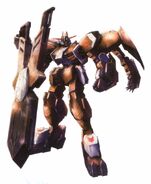 Retrieved from "https://gundam.fandom.com/wiki/ASW-G-11_Gundam_Gusion_Rebake_Full_City?oldid=396334"
Community content is available under CC-BY-SA unless otherwise noted.