A modified version of the Gundam Gusion after it was confiscated from the Brewers.[1] The modifications were done by Teiwaz engineers (more accurately those with the Turbines) using spare parts from Gundam Barbatos, and the Alaya-Vijnana System salvaged from a Man Rodi was also installed in its cockpit.[1][2] With a compatible pilot like Akihiro Altland in control, the Alaya-Vijnana System allows the Gundam to display its original performance. While the original Gusion was too heavy for use under gravity, the Gusion Rebake has no such problems as the changes to it restored the Gundam Frame's versatility to operate in any environment.[1] The frame's versatility could also be seen in how it can support the drastic change in form from the Gusion into Gusion Rebake.[1]

Unlike the original Gusion which relies on its tough armor and high reactor output for superior close combat capabilities, the Gusion Rebake is now capable of long-range support due to the high sensitivity sensors fitted in its head.[1] The Gusion Rebake's head has two different modes, a Normal Mode for short to middle range combat, and an Aiming Mode for long range combat.[1] By mastering the two modes, the suit can be used to handle any combat situations.[3] Other interesting features of the Gusion Rebake include two sub-arms hidden in the booster pods on the back, and a rear skirt armor that can be used as a shield.[1] The sub-arms are derived from a Graze's arms,[1] while the booster pods are modified from the Gusion's leg armor.[4] The rear skirt armor was previously a part of the Gusion's back armor and as such, it has high defensive strength when deployed as a shield.[1]

Modified from the Gundam Gusion's back armor, it is one of the final remnants of Gusion's time as a heavily-armored mobile suit.[1] As such, this large shield has very high defense capabilities,[1] being able to withstand and even deflect the Kimaris' Gungnir thrust at full speed with no apparent damage to its surface. The shield is mounted on the left forearm when used, and when not in use, it is mounted on the rear-waist, serving as the rear skirt armor[1] and provides additional thrusters. The Gusion Rebake Halberd can be stored on the shield's underside.

A battle axe with an extendable handle. When the handle is fully extended, it has higher attack power when swung as well as a broader effective range. By retracting the handle, it can serve as a short axe for close combat at shorter range or to serve as a throwing weapon. When not in use, it is stored behind the shield in the short axe form.

The same weapon as used by the Gundam Barbatos. It is a 300mm caliber gun with a 60mm machine-gun at the bottom, though its emphasis was placed on power rather than accuracy. Although it is produced for use mainly in zero gravity environment and space, it seems to function fine when used under gravity. The Gusion Rebake wielded a pair of these during its first battle on Earth.

A short size hatchet-like weapon that increases the mobile suit's power in close combat. There are thrusters on the opposite side of the blade, and they can be activated at the time of impact to deal greater damage.[5]

Obtained from the EB-06j Graze Ground Type during the battle outside Edmonton, the battle blade is a sword-type melee weapon that is developed for ground combat and is easy to wield due to its lightweight.

An organic device system, this old man-machine interface was developed during the Calamity War to maximize the abilities of the mobile suit. Hence, most mobile suits from that era, like the Gundams, are compatible with it. The system has two parts, one part is installed in the mobile suit, and the other part is implanted into the pilot’s spine. With this system, the pilot can connect to the mobile suit's computer and directly process mobile suit data. It also allows the pilot (even uneducated ones) to operate mobile suit for combat without reading the instruction manual. The implant in the pilot also enhances spatial awareness.[6] The drop in technical capabilities after the Calamity War, coupled with the use of an incomplete version of the system in the Outer Sphere areas (such as Mars and Jupiter), lead to the implant surgery having a low success rate and can only be done at a young age to let the implant fuse as the pilot grow. The Alaya-Vijnana system installed in Gundam Gusion Rebake was salvaged from a Man Rodi, it was not present in its earlier Gundam Gusion form.[2] With this system in place, compatible pilots like Akihiro Altland can display the original performance of the Gundam, something that Kudal Cadel cannot while he was piloting Gundam Gusion. Through the system, the pilot can see things not possible with the naked eye in Aiming Mode, whereas in Normal Mode, a sensation akin to the living body's sense of distance is transmitted to the pilot instead.[1] The system also assisted in the control of the suit's four arms (two primary arms, two sub-arms).[3]

Derived from Graze's arms, a sub-arm is stored in each of the backpack booster pod.[1] The output of these arms are comparable to the Gusion Rebake's main arms, and can fire the Graze's 120mm Rifle with high accuracy.[1] They can also be used in melee combat, attacking the enemy with the halberd.

The head of the Gusion Rebake can change from its normal configuration, the Normal Mode, into the Aiming mode, the configuration better suited for long range combat.[1] When transformation into the Aiming mode, the top of the head and the cheeks would slide forward, while the chin would move up, and as a result, the Gusion Rebake's face is fully covered. In Aiming Mode, the high sensitivity sensors in the head performs at their maximum capability.[1] For users of the Alaya-Vijnana System, this mode not only grants them visual range beyond those of the normal human's but also the ability to visualize various information including the flow of the electromagnetic waves.[1][7]

Wanting to honor the death of Masahiro Altland, Akihiro requested to Orga that he become Gundam Gusion's pilot. Accepting his wish, Orga prevented the Gusion from being sold. With the help of the Turbines, Gusion was remodelled into the Gusion Rebake using spare parts from Gundam Barbatos. Akihiro first piloted it to assist Mikazuki/Gundam Barbatos against Gaelio/Gundam Kimaris outside the Dort Colonies. Alongside the other Tekkadan mobile suits, Gusion Rebake later descended to the Earth.

After the battle of Edmonton, the Gusion Rebake participated in numerous battles for Tekkadan, and suffered severe damage as a result. It was then sent to the MS Workshop in Saisei to receive an overhaul alongside the Gundam Barbatos, and was upgraded into the Gundam Gusion Rebake Full City. 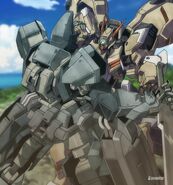 Graze Ground Types destroyed by the Gusion Rebake. The Gusion Chopper can be seen in one of the wrecked machines (Ep 25)

Retrieved from "https://gundam.fandom.com/wiki/ASW-G-11_Gundam_Gusion_Rebake?oldid=450287"
Community content is available under CC-BY-SA unless otherwise noted.