The ASW-G-11 Gundam Gusion is a mobile suit of the Mobile Suit Gundam IRON-BLOODED ORPHANS television series. It is piloted by Kudal Cadel.

One of the "Gundam" frames that were produced and used in the Calamity War, roughly 300 years ago. Gundam units like the Gusion are able to achieve a high energy output because they possess two Ahab Reactors. However, because it is difficult to run the two reactors in parallel operation, only a total of 72 Gundam Frames were ever produced.[1] By using the two reactors at their maximum output and combining that with high output thrusters, the Gusion was able to obtain excellent mobility while equipped with super heavy armor.[2][3][4]

Although the Gundam Frame is highly versatile and can be used in any environments, the space pirate group, Brewers, customized the Gusion for space use (particularly for the debris zone) as the group do not intend to operate under gravity.[2][3] Large propellant tanks are placed within the suit's armor to reduce the risk of the Gusion running out of fuel due to its weight. However, its solo flight distance and combat operational time is still considered to be short.[2] Despite this, the Gusion remains a formidable opponent due to its superior armor that can't be dented by anti-aircraft attacks.[2] The armor is also able to withstand a shot from Gundam Barbatos' smoothbore gun in close range, and can render sharp, bladed weapons useless. Its main weapons are a large thruster-equipped hammer and a sub-machine gun.[5]

A hammer used by the Gusion that uses its mass in order to deal heavy damage. It weighs in excess of 15 tons, and has four thrusters at the back of the hammer head which help control the weapon's trajectory as well as its impact shock.[2] It is stored on the back when not in use.

A mobile suit-use submachine gun that is widely circulated, pirates favor the weapon due to its relatively low price.[2] Due to its light weight, it is easy to handle.[2] It has a sliding stock structure and is stored on the rear waist armor when not in use.[6]

A pair of vulcan guns are mounted on the top of Gusion's head, they have a high-rate of fire but little power. The vulcan guns can however damage lightly armored areas such as the sensors and are ideal for intercepting incoming missiles or enemy units at close range. Gusion's vulcan guns can also be used to fire signal flares.

Two hand grenades are stored behind each side skirt armor, for a total of four hand grenades. The hand grenades can be released from storage directly to act as space mines, deterring pursuing enemy units.

The Gusion's chest houses four 400mm Buster Anchors used for attacking ships and mobile suits. They are the largest caliber firearm installed on a mobile suit.[6]

A short size hatchet-like weapon that increases the mobile suit's power in close combat. There are two thrusters on the opposite side of the blade, and they can be activated at the time of impact to deal greater damage.[7] In between the thrusters is a slot that allows the weapon to be mounted on the rear waist armor when not in use.[4] The Gusion Chopper was most likely confiscated by Tekkadan, since it was used by the ASW-G-11 Gundam Gusion Rebake against Gjallarhorn forces on the outskirts of Edmonton.

A long axe with a hammer at the tip. The hammer is actually a spike ball and is connected to the axe's shaft via retractable chains, hence it can be shot out or used as a flail. Overall, the Gusion Axe is a close combat weapon with a long effective range.[7] Can be stored on the back when not in use. Not used in the anime.

The Gundam Gusion is the 11th of the 72 Gundam Frames created by Gjallarhorn near the end of the Calamity War to counter the threat of the powerful mobile armors such as Hashmal. The Gundam Gusion was discovered in recent years in a high density debris zone that's very difficult to navigate.[2] It is passed on between different pirate groups that operate in the area until it eventually landed in the hands of the Brewers, where it is used by MS Pilot Kudal Cadel.[2]

During Brewers' second battle with Tekkadan, the Gundam Gusion was out-maneuverer by Mikazuki and his lighter, more agile Gundam Barbatos. Trying to find a way of gaining the upperhand on Barbatos, Cadel saw Masahiro Altland engaged with his brothers' EB-06/tc Graze Custom: the Graze's back was to the Gusion. Cadel charged towards the two with the intent of taking the Graze Custom as a hostage. He then swings the Gusion's hammer at them but Masahiro pushed Akihiro's Graze Custom out of the way at the last minute, and the hammer slammed into Masahiro's Man Rodi's chest and pin it to the asteroid behind it. Barbatos continued its attack on the Gusion, eventually knocking its hammer away before stabbing its Long Sword between the exposed "neck" of Gusion and through its cockpit, killing Cadel in the process.

The machine is later seized by Tekkadan along with nine salvageable Man Rodis. Since it was the Gusion that killed Akihiro's younger brother, Orga Itsuka considered selling the Gusion along with the nine Man Rodis. After a funeral was held for Tekkadan's crew and Brewers' Human Debris that died in the battle, Akihiro Altland expressed to Orga his desire to pilot the Gusion as a way of remembering his deceased brother. The unit's armor was later dismantled and new armor fitted on using spare parts from Gundam Barbatos and developed into Gundam Gusion Rebake. 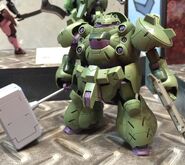