The Gundam Barbatos Lupus fought a fierce battle against the Hashmal in the vicinity of Chryse, a city on Mars and was so severely damaged that it was sent to the Saisei's MS workshop for a major upgrade.[1] Data sampling of Barbatos Lupus’ fight with Hashmal was also conducted during the overhaul.[2] To match the combat data of Mikazuki Augus, who was increasing his compatibility with the mobile suit through the Alaya-Vijnana System, the machine's response speed was increased to the limit of its theoretical value.[1] Movement of the frame's joints were also delicately tuned to match the pilot's actual sensations.[1] The suit's cockpit hatch was changed from its predecessors' top opening method to a front opening style in consideration of Mikazuki's worsened disabilities.[3]

To more intuitively reflect Mikazuki's fighting style, the suit's arms were enlarged and elongated like a beast, and various weapons are fitted on the body.[1][4][5] The arms' frame structure was also upgraded and reinforced.[1] The tail parts of the Hashmal was transplanted to the suit's back, and through the Alaya-Vijnana System, Mikazuki controls this tail blade as if it was a limb.[1] Overall, the Gundam Barbatos Lupus Rex is customized for close combat, and its silhouette gives it a more ferocious look than its predecessors.[1][4] The word 'Rex' means 'King' in latin, and this is fateful as Mikazuki is going along with Orga Itsuka, whose aspiration is to be King of Mars.[1]

Developed for Gundam Barbatos Lupus Rex by Teiwaz's MS workshop, besides fitting Mikazuki's combat style, this heavy weapon also takes into view combat against battleships.[1][3] The telescopic handle helps to close the gap with enemy unit.[1] When not in use, it can be mounted on the rear waist horizontally.[1]

The tip of the mace and the bottom of its handle are equipped with a pile bunker each.[1]

The Hashmal's tail parts were transplanted onto Gundam Barbatos Lupus Rex's back, and combined with a blade made of rare metal for better close combat performance.[3][5] The resulting tail blade can retract or extend to strike opponents as directed by Mikazuki through the Alaya-Vijnana System, and is useful for one against many or other unfavorable combat situations.[2][5]

Due to the rex nails mounted on the fingers, the arms of the Barbatos Lupus Rex can function as powerful weapons that can pierce opponent machines.[1] Like the Tail Blade, the rex nails and the suit's toes are made of rare metal.[6][2]

Each forearm contains a built-in 200mm gun.[1] This weapon is a further development of the Barbatos Lupus’ firearms.[2]

Gundam Barbatos Lupus Rex is equipped with pile bunkers on both heels.[5]

A close combat weapon used by Graze that the Barbatos Lupus Rex obtained temporarily during its last battle.[7]

A lance-shaped mace designed for anti-ship combat, it has a telescopic handle.[8]

A sub-arm is stored within each forearm.[1] When deployed, the black part on the back of the forearm will flip open, and the sub-arm will unfold into its full length.[1]

The Gundam Barbatos Lupus Rex was first seen in combat during Tekkadan's attack on JPT Trust, a Teiwaz subsidiary headed by Jasley Donomikols. It easily dispatched the latter group's mobile suits, and ended the battle by killing Jasley through destroying the bridge of his ship with the Ultra Large Mace.

It was later sent to Earth to assist in McGillis Fareed's coup of Gjallarhorn, and played a role in disabling the mobile suits at the organization's headquarter. It then engaged the ASW-G-XX Gundam Vidar in the headquarter's basement. Initially, Gundam Barbatos Lupus Rex had the edge over its enemy, but they fought on more equal terms when the Gundam Vidar's Alaya-Vijnana Type E was activated. The fight stopped after ASW-G-01 Gundam Bael's intervention, and Gundam Vidar retreated back to space.

During the battle between the Arianrhod Fleet and McGillis's Coup d'etat group, which Tekkadan had allied with, the Barbatos Lupus Rex was kept occupied by the unrelenting EB-08jjc Reginlaze Julia as per Rustal Elion's plan. This neutralized the effects the Gundam could've had on the battle. Later, when Tekkadan came up with a daring plan to charge into the Arianrhod fleet, the Barbatos Lupus Rex was deployed as the vanguard. It then clashed with the Reginlaze Julia again and severed the latter's left arm. However, it failed to stop the Reginlaze Julia from interfering with the ASW-G-64 Gundam Flauros (Ryusei-Go)'s Dainsleif shot at the enemy flagship, and as a result, the attack missed its mark.

When Tekkadan's Mars HQ was surrounded by the Arianrhod Fleet, the Barbatos Lupus Rex was deployed alongside the group's remaining mobile suits to buy time for the non-combatants to escape via the secret tunnel underneath the base. The suit was heavily damaged when the Arianrhod fleet launched an orbital bombardment using the Dainsleifs. Despite this, it continues fighting until its pilot, Mikazuki, passed away from his fatal injuries. 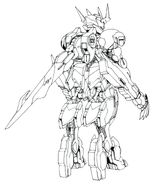 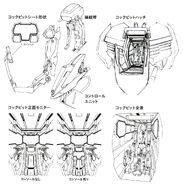 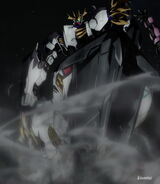 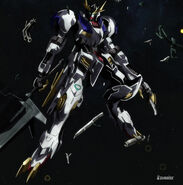 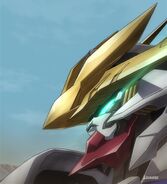 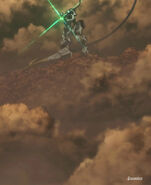 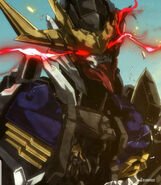 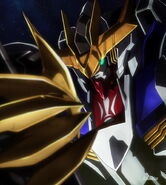 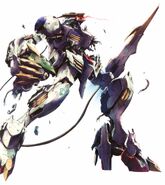 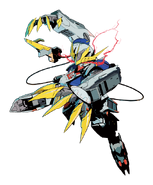 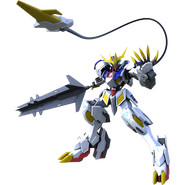 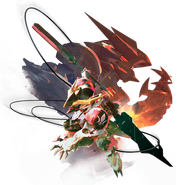 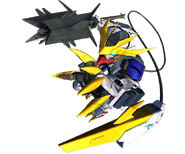 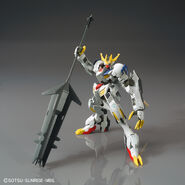 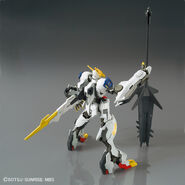 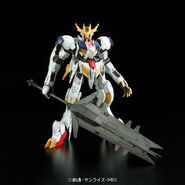 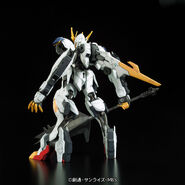