The Gundam Barbatos is one of 72 "Gundam" frames that was produced and used in the Calamity War, roughly 300 years ago.[1][2][3] Chryse Guard Security currently uses it as a power reactor. [1] Aside from the fact that its Ahab Reactors were still functional, this was done mainly because Barbatos' cockpit was missing when it was found,[4] and a new one similar to the one used by the CGS mobile workers had to be installed prior to its redeployment by the 3rd Group.[5] Poor maintenance over the centuries since the Calamity War has degraded the Barbatos' armor and full combat potential.[6]

Gundam units like Barbatos are able to achieve a high output because they possess two Ahab Reactors.[2][7] However because it is difficult to keep them in parallel operation,[2][7] only a total of 72 Gundam frames were ever produced.[2][7] The burden experienced by the pilot is high as a result of the high output and maneuverability however it's mitigated by the implementation of Inertial Control due to the use of Ahab Particles generated from the reactor when a phase transition occurs inside its vacuum device.[7] The cockpit structure is positioned in front of the reactor to take advantage of this.[7] Among the same frame machines, Barbatos has been adjusted for an emphasis on versatility, it has the potential to adapt to every circumstance by performing exchanges of all sorts of equipment.[7] Thus, it can grow stronger as it gains more weapons and armor from defeated enemies.

A physical destruction weapon made from a rare alloy with high hardness that is also used in mobile suit frames.[7] As mobile suits use Nano Laminated Armor for protection, such striking weapons are considered to be effective. The centre spear-like tip of the mace can extend forward and impale enemy unit. [7] The Mace can be stored on the back when not in use.

A mobile suit-use sword created at Teiwaz's HQ Jupiter factory.[7] It shows its superiority during localized attacks because it's easy to handle due to its lightweight.[7]

Already equipped when Barbatos was discovered on Mars.[7] It is thought to be one of Barbatos' original equipment but it is not a complete certainty.[7]

Large caliber rifle produced for use mainly in zero gravity space, emphasis was placed on power rather than accuracy.[8] It can be folded up and mounted to the back.[8]

A shooting claw weapon mounted on the left forearm that is used for restraining enemy mobile suits as well as for clinging to enemy vessels.[9] It was taken from Gaelio's Schwalbe Graze.

Same close combat weapon as used by Graze. Because MS are protected by Nano Laminated Armor, direct blows are considered to be extremely effective during MS battle. The Battle Axe is an equipment developed for MS battle.

Barbatos was in this form when Maruba Arkay (CGS president) discovered it in Mars' desert 300 years after the Calamity War.[7][4] Since its Ahab Reactors were still in an operational state it was used as the CGS HQ's power source until Mikazuki boarded it.[7] It's missing its shoulder armor plating.

CGS later transitioned into Tekkadan, and prior to Tekkadan's departure to Earth, the Barbatos 1st Form is fitted with the shoulder armor from the captured EB-06 Graze and becomes the 2nd form.[10] The Nano Laminated Armor that was on the main body was taken and painted on the shoulder armor, thus they have the white and blue color scheme. [10]

After the battle with Gjallarhorn near the low orbit station, the Barbatos 2nd Form is equipped with the Wire Claw captured from EB-05s Schwalbe Graze (Gaelio's unit) to fix the damaged left forearm armor, becoming the 3rd Form. [11]

Barbatos' original form, it is reproduced by Jupiter technicians based on ancient materials from the time of the Calamity War that had been recorded on Teiwaz's database.[7] The machine's weight balance is stabilized because of additional armaments and the reactor output was also improved.[7]

Barbatos was one of the 72 Gundams utilized during the Calamity War 300 years prior. It was later discovered by Maruba Arkay in the Mars' desert and was recovered to serve as a power generator for Chryse Guard Security's base. The machine was taken out of the base by Mikazuki Augus during Gjallarhorn's assault. CGS, now Tekkadan, continues to improve the suit with parts and armor taken from Gjallarhorn's mobile suits.

Gundam Barbatos being used as a power reactor. 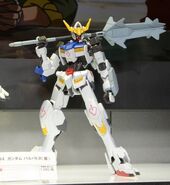 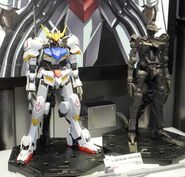 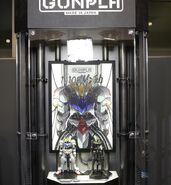 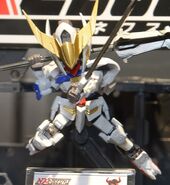 Long distance transport booster
Add a photo to this gallery

Retrieved from "https://gundam.fandom.com/wiki/ASW-G-08_Gundam_Barbatos?oldid=307653"
Community content is available under CC-BY-SA unless otherwise noted.