The ASW-G-01 Gundam Bael (ガンダムバエル, Gandamu Baeru?) is a mobile suit from the second season of Mobile Suit Gundam IRON-BLOODED ORPHANS television series. It was originally piloted by Agnika Kaieru, and 300 years later by McGillis Fareed.

During the Calamity War, a quarter of the human population was lost due to the extensive fighting against the mobile armors, which had been developed for the efficient extermination of human beings.[1][2] To stop these mobile armors, the Alaya-Vijnana System, which establishes compatibility between a person and a machine, was employed.[1][2] During this process, 72 Gundam Frames were produced, and they came to be perceived as special due to the outstanding military achievement of Agnika Kaieru, who piloted the first Gundam Frame, the Gundam Bael.[2]

Compared to subsequent Gundam Frames, the Gundam Bael is a relatively standard unit with little special features.[3] However, it was a key mobile suit in ending the war and became a figurehead of the Gjallarhorn.[1] Thus, Agnika and Gundam Bael were idolized during those times.[1] Gundam Bael's main armaments consisted only of two swords, and this was proof that Agnika was fully compatible with the mobile suit via the Alaya-Vijnana System.[1][2] For Agnika, who realized superhuman reactions, no other armament was better than these unbreakable swords.[1][2] Agnika passed away as the Gundam Bael went to sleep, and it was believed his soul resided within the Gundam Bael.[2]

The Gundam Bael was stored in the Gjallarhorn's headquarters, Vingolf, until it was awakened by McGillis Fareed.[1][2] The mobile suit remained unchanged during its long slumber, so its frame structure, as well as its armaments, are as they were when Agnika was the pilot.[1][2] The emblem on its left shoulder is a symbol of the Gjallarhorn at the time of the organization's formation.[1][2]

Stored on the blade holder mounted on the rear skirt armor, the pair of Bael Swords are forged from rare metal, just like the V08-1228 Grimgerde's Valkyrja Blades.[1][3][4][5] They serve as Gundam Bael's primary weapon, and symbolized the strength of Agnika Kaieru who needed no other armament.[1][2][4][5] Despite being lightweight, the Bael Swords can slice apart mobile armor's and mobile suit's frame when used by a skilled pilot.[4][6]

An Electromagnetic Cannon is built into each thruster wings, for a total of two such weapons.[1][5][7] Meant for restricting enemy movements, these range weaponry are fired from the top aperture on the side of the wings.[8][5][7]

A lance-shaped mace designed for anti-ship combat and has a telescopic handle. Used in the manga in the final battle against Kimaris Vidar.[9]

Located on the rear skirt armor, the holders of the Bael Swords employ moving arms to minimize the time needed to draw the swords.[1][2]

A pair of booster equipped wings are mounted on the back of Gundam Bael, they grant high mobility and overwhelming acceleration in zero gravity or when under gravity.[2][5][7] These wings allow Bael to fly over the battlefields as a beautiful devil hunting angels.[2]

An organic device system, this old man-machine interface was developed during the Calamity War to maximize the abilities of the mobile suit. Hence, most mobile suits from that era, like the Gundams, are compatible with it. The system has two parts, one part is installed in the mobile suit, and the other part is implanted into the pilot’s spine. With this system, the pilot can connect to the mobile suit's computer and directly process mobile suit data. It also allows the pilot (even uneducated ones) to operate the mobile suit for combat without reading the instruction manual. The implant in the pilot also enhances spatial awareness. The drop in technical capabilities after the Calamity War, coupled with the use of an incomplete version of the system in the Outer Sphere areas (such as Mars and Jupiter), lead to the implant surgery having a low success rate and can only be done at a young age to let the implant fuse as the pilot grow. However, through his research, McGillis managed to recreate the original version and used it on himself in order to pilot the Gundam Bael.

The Gundam Bael was the first of the 72 Gundam Frames created by Gjallarhorn near the end of the Calamity War 300 years ago to counter the threat of the powerful mobile armors such as Hashmal.

Since the end of the Calamity War, Bael was kept in a basement hangar within Gjallarhorn's Earth Headquarters, Vingolf. After resting there for 300 years, it was reactivated by McGillis Fareed during his coup d'etat.[10] In the final battle against the Gjallarhorn's Arianrhod Fleet that opposed the coup, McGillis and Bael were defeated by Gaelio Bauduin and his ASW-G-66 Gundam Kimaris Vidar. Both the Bael Swords were lost during the fight.

Several years after the failed coup, labeled as the "McGillis Fareed Incident", the Bael was placed back in the Vingolf's basement hangar. Although repaired, it was heavily restrained and without a cockpit. 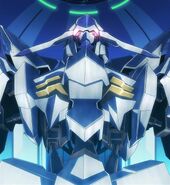 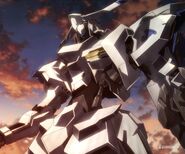 Back in Gjallarhorn's hangar (Ep 50) 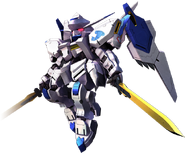 Prototype of the HGIBO 1/144 Gundam Bael 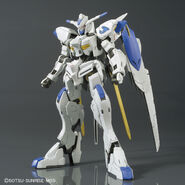 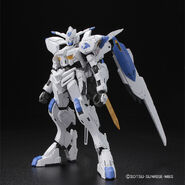