The ARZ-125 Rehaize (aka Re-Hyze) is a transformable mobile suit from Advance of Zeta Re-Boot: Gundam Inle . It is piloted by Alicia Zabi.

The ARZ-125 Rehaize is a ARZ-124HZII [Hyze'n-thley II] that has been modified for Alicia Zabi's own use. Equipped with additional armor and customized equipment brings its specs to that of a 4th Generation Mobile Suit. The additional boosters make it capable of atmospheric entry and space combat.

This weapon fires a focused beam of massive, high-velocity mega-particles, which cannot be deflected by magnetic fields and tears through any conventional armor material. The output power of the mega-particle cannon is 4 times greater than conventional laser weapons at the time and is considered to be more efficient due to most units having semi-transparent coatings on top of their armor which renders Laser weapons virtually useless unless having a laser device at least as big as a mobile suit, excluding the generator.[3]

During the One Year War the researchers of the Flanagan Institute discover that Newtypes emit powerful thoughtwaves - similar to regular brainwaves, but not electrical in nature - which they call psycowaves. The Flanagan Institute goes on to develop a mind-machine interface called the psycommu (psycho-communicator) system, which receives these thoughtwaves and translates them into computer commands. Using this interface a Newtype pilot can direct remote weapons, and operate huge mobile armors, by thought alone. 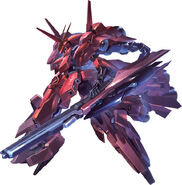 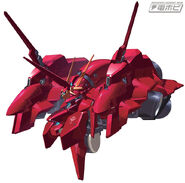 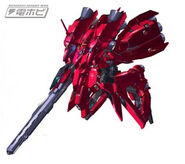 Retrieved from "https://gundam.fandom.com/wiki/ARZ-125_Rehaize?oldid=440314"
Community content is available under CC-BY-SA unless otherwise noted.