A mobile suit used by the Earth Federation Forces to test the Quasi-Psycommu system, the Silver Bullet is a modified AMX-014 Döven Wolf created by Anaheim Electronics based on captured units. Although its armament is trimmed down due to its purpose, it gained higher output compared to the original Döven Wolf and is more than capable of participating in actual combat. The removal of the abdominal mega particle cannons also lightens the suit. Some Silver Bullets have a Gundam head for testing the Quasi-Psycommu weapons, while others have a GM head for system analysis of the enhanced measurement sensors. The Vist Foundation were given some of them after the EFF was done with the tests.

Unlike the Döven Wolf's, Silver Bullet's pair of head-mounted Vulcan Guns are 60mm in caliber instead of 30mm. These shell firing weapons have a high rate of fire but little penetration power. They are ideal for shooting down small, lightly armored targets such as missiles, attack vehicles, etc. They are also often employed as a deterrent against closing in enemy units.

The same model as used by the RGM-89D Jegan D Type. It has a short barrel for ease of handling, and is most effective in mid-close range combat due to its short firing range. Although its output is reduced, it has an excellent rate of fire, and can eliminate enemy accurately during melee combat when utilize in conjunction with the composite sensor at the top of the rifle.

Beam Sabers are the standard close combat weapons employed by many mobile suits. Powered by a rechargeable energy capacitor, it emits high-energy Minovsky particles to form a blade-shaped I-field (via manipulation of electromagnetic fields), and then fills this I-field shell with superheated Minovsky particle plasma to produce an effective cutting blade. The Silver Bullet has two beam sabers stored in the hip armor.

Each INCOM remote weapon mounts a single beam gun. Because of limitations the wires cannot supply enough power to allow the beam gun to be continually used. After a set number of shots the INCOM must be recalled so that the beam gun can be recharged.

A multipurpose defensive equipment that is a combination of the Jegan's shield with Döven Wolf's Mega Launcher. The barrel of the beam launcher is shortened, but it can still extend when in use to allow for certain degree of sniping capability. The shield also has a pair of twin missile launchers like the Jegan's shield.

Like its Döven Wolf predecessor, the Silver Bullet has specially designed quasi-psycommu controlled wire-guided forearms that can be launched and maneuvered via built in verniers. These remote arms can be employed to grab and hold enemy mobile suits, as a mid-range melee weapon, and possess an electrical shock ability that allow electricity to flow through the cable and arm into a connected enemy machine. This electrical attack is severely painful to the pilot of the captured mobile suit but is not immediately lethal. Each arm also has a built-in beam gun inside in its palm.

A pair of beam cannons are mounted in the backpack booster binders. Each cannon has a power rating of 4.2 MW.

A pair of 12-tube missile launchers are mounted in the backpack booster binders. The missile tubes are loaded with AMS-01H Heavy Missiles.

AMS-01H heavy missiles are the model of missiles designed to be loaded into the 12-tube missile launcher.

A pair of AMS-09R Anti-ship missiles can be optionally mounted externally on the backpack. They are larger than the missiles in the missile launcher.

The Quasi-psycommu system was developed to extend the capabilities of remote control to non-Newtypes. This system can actively scan the pilot's brainwaves, no matter how weak they are, and then let the computer translate the thoughts into commands to be issued to remote weapons. Using the quasi-psycommu even non-Newtypes can control simple wire-guided remote weapons, such as INCOMs. INCOMs, unlike funnels or bits, still have to be tethered to their control unit by wires because the electrical signals to the INCOM would otherwise be disrupted by Minovsky Particles.

In U.C. 0089, after the First Neo Zeon War, the asteroid base Axis, which had been the stronghold of the Neo Zeon forces, was placed under the control of the Earth Federation government. At this point, several AMX-014 Döven Wolf units which remained there as reserve fighting strength were captured. These units were transferred to Anaheim Electronics's Granada Factory and modified into the ARX-014 Silver Bullet, which were used for technical research into the quasi-psycommu system, a psycommu system which could be used even by non-Newtypes soldiers. After the research was completed, some of these Silver Bullets were transferred to the Vist Foundation.

Later, three Silver Bullets defended Industrial 7 against Norm Basilicock and Riddhe Marcenas's squadron of RGZ-95 ReZEL and RGZ-95C ReZEL Commander Types. They were outmaneuvered and almost defeated when one of the pilots contacted Riddhe and told him the Federation's intention to stop the deal between the Sleeves and the Vist Foundation. Riddhe, detecting the Silver Bullet's wired hand heating up, swiftly cuts through the Silver Bullet and defeats it and the other mobile suits.

Another Silver Bullet was used by Syam Vist's bodyguard Gael Chan to protect Banagher Links when Full Frontal attempted to take Laplace's Box by force. Attempting to break through Frontal's massive mobile armor, the NZ-999 Neo Zeong, Gael was swiftly defeated by Frontal. He was nearly killed when Banagher called on the RX-0 Unicorn Gundam to defend him. 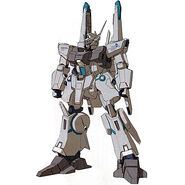 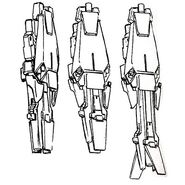 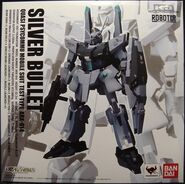 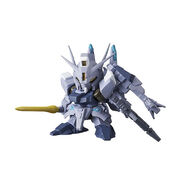